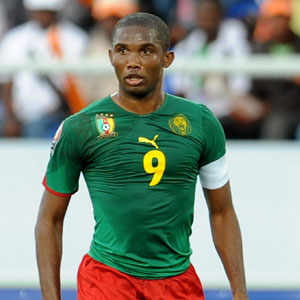 Mexico got their World Cup campaign off to the perfect start, with Oribe Peralta’s strike proving the difference as they patiently overcame a dogged Cameroon side to move level on points with hosts, Brazil, at the top of Group A.
Giovani dos Santos saw two first half efforts ruled out for offside as Mexico had the better of the chances, but it took until Peralta’s 60th minute strike for the central American side to take the lead in a rain-lashed Natal.
Both sides had pre-game selection dilemmas up front, with both coaches reported to be considering dropping their talisman in the build-up to the game due to underwhelming pre-game performances and, in the case of Cameroon, allegations of ‘treason’ against Samuel Eto’o for his role in the strike action that threatened the side’s participation in the tournament.
Mexico started the game with Manchester United forward, Javier Hernandez, on the bench, while Cameroon boss, Volker Fink, kept the faith with captain Eto’o.
Stephane M’Bia was handed a start in Cameroon’s central midfield, with Joel Matip relegated to the bench.
The game started in controversial fashion, with former Tottenham forward, Dos Santos, seeing an 11th minute strike ruled out for offside.
Slotting in a Hector Herrera cross from the right, Dos Santos was judged offside despite replays suggesting that the the Villarreal striker was level.
It was to be the first of two Dos Santos strikes incorrectly ruled out, with the linesman disallowing a 29th minute header having wrongly judged a Mexico corner to have been flicked on to Dos Santos by a Mexico player when it had in fact hit the head of Cameroon’s Eric Choupo-Moting.
In between Dos Santos’ strikes, both teams had chances to score, with Samuel Eto’o hitting the post after a strong run from Benoit Assou-Ekotto and Rafael Marquez nodding over a set-piece that was primed for the head of his centre-back partner, Hector Moreno.
Mexico had the better of the play against an unambitious Cameroon side and should have taken the lead numerous times before Peralta opened the scoring in the 60th minute.
The side’s top scorer in qualifying had already been denied by Cameroon keeper, Charles Itandje, when one-on-one early on in the second half, but made no mistake on the hour mark when handed the opportunity to sweep home the opener following Itandje’s save from a Dos Santos strike.
Cameroon rarely threatened to find an equaliser, with set-pieces proving their most likely route back into the game, but almost drew level at the death, with Guillermo Ochoa diving to save a Benjamin Moukandjo header.
Mexico faces hosts Brazil on Tuesday, while Cameroon’s next fixture sees them take on Croatia a day later.