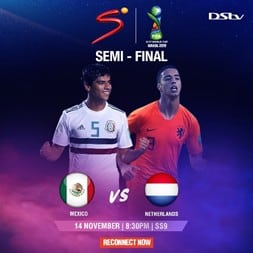 On Friday 15th November 2019 at 12:00am Nigerian time, Brazil, the three-time champions and first-time hosts of the 18th edition of the U-17 World Cup, will play France, who have only reached the last four once before at Trinidad and Tobago 2001.
Brazil is hoping to win its 4th World Cup and 1st since the year 2003. Gabriel Veron, Brazillian No 7, with 21 caps (6 goals) scored twice and impressed for Brazil at group stage. The team will be counting on him and other forwards to hit the target on Friday.

Mexico, tournament regulars and one of the most successful teams in U-17 history will be battling the Netherlands on Thursday 14th November at 8:30pm Nigerian time. Mexico won the FIFA U-17 World Cup for the 1st time at Peru 2005. In 2013, Mexico came close to a 3rd U-17 World Cup crown but was defeated by Nigeria.
DStv subscribers can watch all the U-17 World Cup matches live on Super Sport 9 (CH 229).
Nigerian football fans can also watch live games via the DStv Now mobile app.