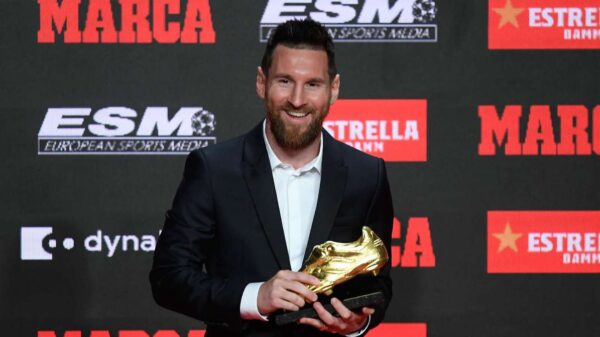 Lionel Messi has joined his old boss Pep Guardiola in donating €1 million (£916,000) to help in the fight against coronavirus.
The Barcelona captain has been working hard to raise awareness about the pandemic and has now taken it a step further by producing a huge donation to help healthcare workers with supplies.
“Leo Messi makes a donation for the fight against Covid-19 at the Clinic. Many thanks for your commitment and your support,” Barcelona’s Hospital Clinic account wrote on Twitter on Tuesday night.
Messi joined Match of the Day presenter Gary Lineker, Liverpool goalkeeper Alisson Becker and a host of other recognisable faces from football in raising awareness with a video highlighting the five key steps to beating the virus.
Barcelona, along with the rest of Spain, is currently in lockdown as the country tries to get a grip of the virus which is rapidly spreading.
The coronavirus death toll in Spain jumped by 514 in a single day, as the situation in the country quickly worsens.
Official figures on Tuesday show that 2,696 people have now died in the country and close to 40,000 are infected.
News of Guardiola’s donation arrived earlier on Tuesday as he becomes the latest star name to offer financial support.
The Manchester City manager has earmarked the money, sent to the Angel Soler Daniel Foundation, to be spent on purchasing medical equipment.
The fund is named after a doctor from Santpedor – the town Guardiola hails from – who passed away in the 1970s.
The foundation had raised just over €33,000 after the initial plea and Guardiola’s personal contribution has rocketed their resources.
Cristiano Ronaldo, Messi’s long-term rival, and agent Jorge Mendes put a £1 million donation together to finance three intensive care units for patients suffering from COVID-19 in Portugal.
The Portugal captain and Mendes have been in contact with the hospitals already and are planning to equip two wards in Santa Maria hospital in Lisbon and one in Santo Antonio in Porto.
Wards in Santa Maria will come with ten beds and ventilators while the wing in Santo Antonio will have fifteen beds and ventilators.
The chairman of the Santa Maria board of director has confirmed the donation, while Santo Antonio hospital have also revealed that the duo are helping out too. Daniel Ferro, president of Santa Maria, thanked the pair: ‘We were contacted by Jorge Mendes, who volunteered with Cristiano Ronaldo to finance two intensive care units for critical patients suffering from COVID-19.
“There are fans, monitors, infusion pumps, beds … all the equipment that constitutes an intensive care unit equipped to provide care to a COVID-19 patient.”