Merkel to step down as German chancellor in 2021 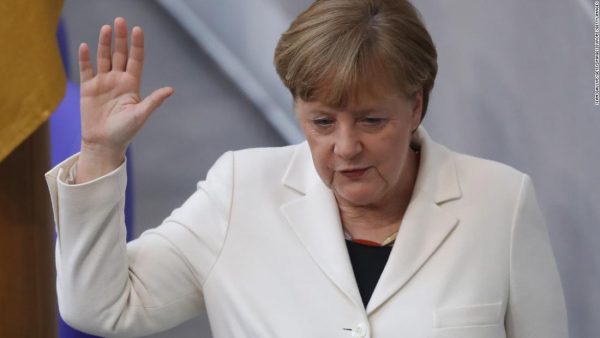 German Chancellor Angela Merkel said on Monday that she would not run for another term as chancellor in 2021 when the current term ends.
Having served as chancellor for 13 years, Merkel told a news conference at the headquarters of the Christian Democratic Union that she will remain as chancellor for the remainder of the term.
Merkel has been CDU chairwoman since 2000.
She said on Monday she will not run again for CDU leadership at the party’s next federal conference in Hamburg in December.
Merkel added that she will not take any other political positions after the chancellorship, and has informed her decision to Horst Seehofer, leader of Christian Social Union, and Andrea Nahles, chairwoman of the German Social Democratic Party.
Merkel’s leadership has withered since the 2015 European refugee crisis when she welcomed over one million refugees to centre Germany, triggering the rise of right-populist politics and the fragmentation of the country’s party politics.
Her CDU suffered a significant drop of support in 2017 federal elections, but Merkel could not help win back voters lost.
Merkel’s Monday announcement came after the state election in Hesse on Sunday, in which the CDU’s votes decreased by more than 10 per cent compared with the last election five years ago.
Earlier this month, CSU, CDU’s Bavaria-only ally also suffered a setback as its votes slumped over 10 per cent.
“As the chancellor and the chairwoman of the CDU, I carry the responsibility both for the successes and for the failures,” Merkel told the news conference, describing the results in Hesse as bitter and disappointing.
Merkel said now it needs to stop to think, and the time has come to open a new chapter, saying that the candidacy for the new CDU party leadership included the party Secretary-General, Annegret Kramp-Karrenbauer and German Federal Health Minister, Jens Spahn.
“I want my party gets the freedom to prepare well for the future,” said Merkel.
Xinhua/NAN.