Mbaka reveals why he was held hostage, plot to hold him for one month 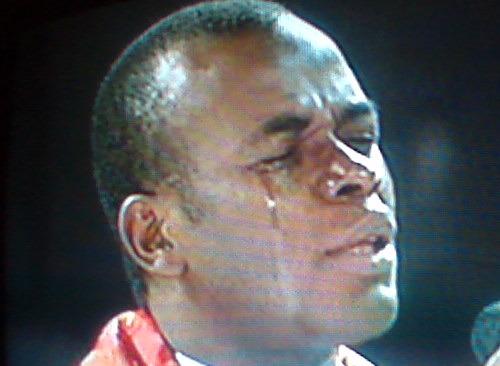 The Spiritual Director of the Adoration Ministry Enugu Nigeria, Rev. Fr. Ejike Mbaka, has revealed that he was held hostage by the authorities of the Enugu Catholic Diocese for the two days he went missing.

Mbaka revealed this when he spoke with his parishioners on Wednesday at the Adoration Ground, Umuchigbo Nike, Enugu.

This came after he had missed his Wednesday weekly prayer meeting, titled: “I no dey.”

This was followed by a massive protest by youths numbering over 1,000 who stormed the residence of the Bishop of Enugu Diocese, Most Rev. Callistus Onaga.

Speaking after his release at about 2:45pm on Wednesday, Mbaka said the plot was to keep him incommunicado for 30 days because he offered a word of prayer for the leader of the proscribed Indigenous People of Biafra, Nnamdi Kanu.

He said he was summoned by Onaga on Tuesday and kept incommunicado.

He said the plan was to keep him for 30 days.

He said a lot of issues were presented against him after which the Church leadership, led by Bishop Onaga, told him that he would remain indoors for one month, a period that would allow him pray and meditate over his activities.

The priest said he requested to be allowed the opportunity to come and address his parishioners after which he would shut down, “but they said No.

“I also begged them to allow me send another priest to come and celebrate mass for you today, they said No.”

Mbaka said Bishop Onaga upon seeing the protest over his predicament allowed him to go.

On the case of Kanu, he said: “Are you the owner of my mouth?

“You can’t tell me who to bless.

“If you are not happy that I blessed someone, you have your own mouth, you can curse the person.”