Mayweather gets tiger for Christmas 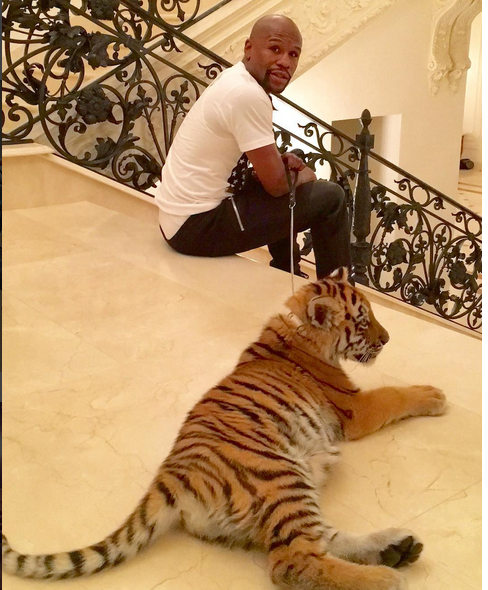 Share
Facebook Twitter LinkedIn Pinterest Email
Last week, boxer Floyd Mayweather shared a photo on social media of “a rare and exotic tiger from India” he said he had received as a gift.
“I want to thank my family here in Moscow, Russia for the hospitality and my early Christmas present, a rare & exotic tiger from India,” he posted on Facebook. “Any suggestions for a name for this two-month old, female tiger?”
Many Facebook commenters excoriated him and a backlash from animal rights groups urged him to move the animal to a sanctuary.
“Mayweather can have anything he wants, and what he should want is an end to the wild-animal trade, not to be a facilitator of it,” PETA stated.
The animal activist group, Big Cat Rescue, cautioned Mayweather from boasting tigers as pets.
“It is our opinion that unless Mayweather has moved to Moscow, this is a sad publicity stunt,” Big Cat Rescue posted on Facebook. “It’s incredibly irresponsible for anyone to think these alpha predators would make good pets. We believe it is cruel and abusive for anyone to own a big cat as a pet. The cub should go to a [Global Federation of Animal Sanctuaries]-accredited sanctuary.”
Mayweather isn’t the first big boxing name to keep a tiger as a pet.
Back in the 1990s, Mike Tyson famously had a tiger named Kenya.
mayweather
Share. Facebook Twitter Pinterest LinkedIn Tumblr Email