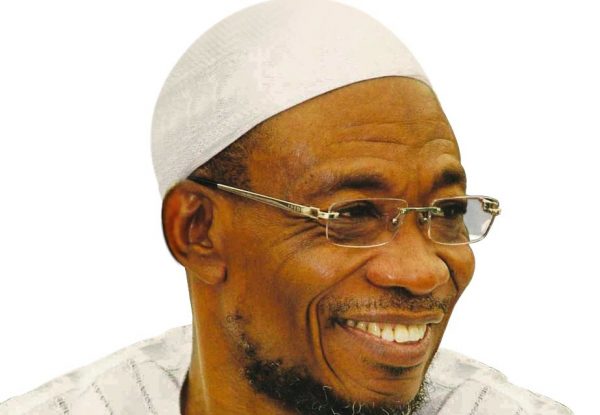 The Governor of Osun State, Ogbeni Rauf Aregbesola, on Tuesday said the massive infrastructural projects going on across the state make it difficult for the citizenry to believe that the nation in general and the state in particular is undergoing economic hardship.
This was as the governor warned that the country must discourage penchant and preference for foreign goods if it must sail through the current economic crisis.
Aregbesola stated this when he played host to the team of the Nigerian Television Authority, Osogbo, led by its new General Manager, Omowumi Omidiji.
The Governor said because of the huge work his administration has undertaken in the state, nobody believes that the state is going through economic crisis like other states of the federation as well as the Federal Government.
According to Aregbesola, the people of the state failed to appreciate the dire economic condition of the state owing to the fact that everyday work is going on in every nook and crannies of the state.
He said: “The difficulty we are experiencing is almost universal; it is national.
“And no sub-set of the federation is exempted from this economic crisis.
“Thus, as a state, we are equally challenged.
“But because of the massive work we embark on in this state, it is difficult for the people to believe that we are going through serious challenges.
“The ongoing work they see everyday in their vicinity thus makes it difficult for the people to appreciate the seriousness of our economic challenges.
“The truth is that we are challenged economically.”
The Governor said the nation must learn a great lesson in what the country is going through now so as to forestall re-occurrence of similar experience in the future.
He averred that with the disappointment in oil, the best elixir in terms of diversification is agriculture.
According to Aregbesola, the citizens of the country, the affluent few in particular and the poor majority, must drastically reduce their consumption of foreign goods and patronage of foreign services.
He said that God has been kind to the nation by giving it the best of weather, which makes agriculture practicable in all geo-political zones of the country round the year.
He noted that whatever can be produced locally should be the staple foods, saying as a nation, Nigeria should depend on what her soil and climate can best produce.
He said if the teeming population of the country refrain from their heavy reliance on foreign merchandise, agriculture will serve as a better alternative to oil as the mainstay of the nation’s economy.
He stated that the country has the population and the market to absorb whatever mass production of good it can embark on locally.
Aregbesola however warned that if the market continues to be saturated with 75 per cent of foreign goods, the poverty trend in the country may continue for a very long time.
He held that the nation is destined for greatness, saying the day its local market is targeted to absorb its locally produced goods is the day the country crosses over to its long overdue greatness.
He continued: “We need to change our consumption pattern and domesticate and indigenise our consumption.
“We must reduce our penchant for foreign goods and services to the barest minimum and increase our local production and services.
“By this, we would have learnt our lessons and come out better from this economic crisis.
“But if we refuse to learn any lesson and we return to our reckless past, it would be sad.
“Generations unborn will not forgive us.
“Whatever we can produce locally should be our staple food.
“We should depend on what our soil and climate can support and produce such crops in commercial quantity.
“If we do this, we are on the path to self-dependency and happiness, but if we continue our dependency on foreign things, we are on the path of continued poverty and dependency.
“We must assume our leadership in the global space by first changing our attitude to life; change our orientation and as well increase our production activities.
“If we do this, we are on the path of greatness.
“Unless we quickly do this, we may remain undeveloped for a very long time.”