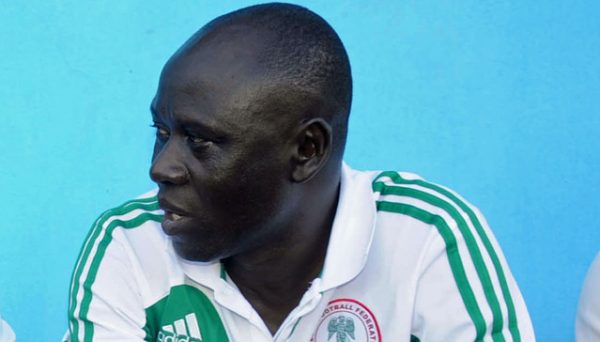 Coach Manu Garba has said he already has a winning strategy in place to dismantle Iran in Tuesday’s 2013 Under-17 FIFA World Cup Second Round Match at the Khalifa Bin Zayed Stadium in Al Ain.
The match, according to Manu, offers the Nigerian youngsters the chance to continue with their excellent form in the competition.
“We would ensure that we win this game within the allotted time and we are looking at the possibility of not allowing the game to be dragged into a penalty shootout,” said Garba.
He added: “Yes, I agree that Iran has been making progress since they started but they won’t progress (beyond the second round) at the expense of Nigeria on Tuesday.”
Though sounding very optimistic that the match would be won by his glory-seeking side within the regulation time, Garba and his assistants are not taking chances as they drilled and perfected penalty kicks with the players at their last training session on Monday.
It would be recalled that a penalty kick cost the team dear at the CAN Under-17 finale when they lost 4-6 to Cote d’Ivoire after a pulsating 1-1 draw.
“Against Iran, there won’t be any margin for errors and we want you to pay proper attention to everything we have done and would do for this match,” Garba further told the players.
At the press conference on Monday, Garba said he was not under any pressure concerning the match.
Rather, he has the belief that destiny already has something in store for Nigeria to win yet her fourth title on an Asian soil.
He said: “All Nigeria’s previous victories in 1985, 1993 and 2007 were all in Asia and we are here again in Asia in 2013 and I think history favours us to win this trophy.
“But we are not talking about winning the trophy now, rather we are talking about Iran and Insha Allah (by the grace of Allah) we shall win our match against Iran.”
Meanwhile, a Brazil elite referee is to handle the Nigeria versus Iran cracker.
Heber Roberto Lopes, an elite referee in the South American Confederation and a Brazil 2014 World Cup designated
official, has been picked by FIFA as the centre referee when Nigeria and Iran battle for a quarter final tickets on Tuesday at the Khalifa Bin Zayed Stadium in Al Ain.
Lopes, a banker became a professional referee in 1995 and received the FIFA badge in 2002.
He is vastly experienced, having officiated in four Brazilian Cup finals and several local and international matches.
He was at the 2003 FIFA Under-17 World Cup in Finland and was named as Brazil’s Referee of the Year in 2009.
To assist Lopes are his two compatriots, Allesandro Rocha and Marcelo Van Grasse, who would serve as first and second assistants.
Another official from the CONMEBOL, Raul Orosco from Bolivia, completes the quartet that would determine the fate of the match.
Incidentally, Nigeria is nominated as the home team of Match No. 44 and the Golden Eaglets would therefore have the honour of wearing the green jerseys.