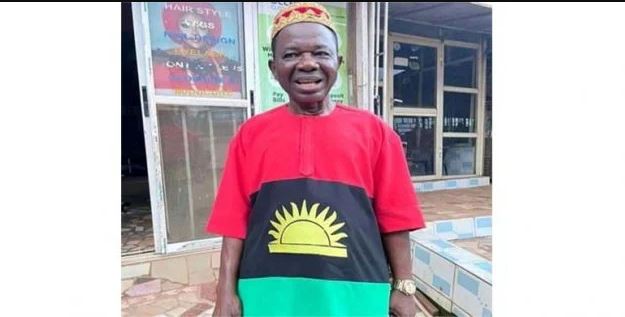 Either out of acute ignorance of the law, diffidence towards it, naivety or a consuming passion to appear hyperactive in the eyes of Aso Rock, the Nigerian security establishment will not stop exuding sickening optics in its operations, to the shuddering embarrassment of the world. Last week, it was another time for the advertisement of this gross lack in mental capacity. Nollywood star, Chiwetalu Agu, was arrested by some officers of the Nigerian Army at the Upper Iweka, Onitsha, Anambra State.

His sin, and as could be seen in a viral video, was adorning flowing apparel that had Biafra insignia on it.

In the video, Agu stood in a moving traffic in the commercial city, beside a bus painted green, the Nigerian colour and which had written on it: Chiwetalu Films. Shortly after, a soldier appeared, clutching a gun, in a menacing mode, his hand clutched to the rifle’s butt. All of a sudden, other soldiers appeared, held Agu roughly, even as he almost fell, dragging the actor like a sack of tomatoes, ultimately pulling and heaving him into a truck. He must have fallen a couple of times in the process. Before zooming off in a commando style with their prized victim, the soldiers fired repeatedly in the sky which resulted in a melee as people scampered for dear lives. Agu was said to have come to Onitsha on a charitable mission of sharing food items to the less privileged.

Later on, the Nigerian Army issued the raison d’être for this sickening assault. Agu, it said, was inciting the public and soliciting support for the Indigenous Peoples of Biafra. In a statement issued by the Director of Army Public Relations, Brigadier General Onyema Nwachukwu, the Nigerian Army denied this globally viewed scene of brutalization by its men, claiming that Agu was gently taken into custody.

“Dressed in a very well known attire of the proscribed group, Chiwetalu Agu was picked up for questioning while inciting members of the public to join the proscribed group. Though he attempted putting up some resistance when troops made effort to take him into custody, he was not assaulted or subjected to brutalization,” Nwachukwu said. The Nigerian Army then urged that people’s expression of their rights “must be done within the confines of the law, bearing in mind the imperative for peace, and national security.”

Released after 24 hours in the Army’s custody, the Department of State Services will not be left out of the binge to impress Aso Rock. It reportedly re-arrested Agu last Friday. This was confirmed in a statement by the DSS Spokesman, Peter Afunaya, who said on Friday that “Army brought him to us. Justice will take its course.”

The day before Agu’s arrest, specifically Wednesday last week, Minister of Justice and Attorney-General of the Federation, Abubakar Malami, riled the country with another of his celebrated badly-rehearsed statements that brim with sickening flavor of partisanship. Speaking to the press after the Federal Executive Council meeting, Malami said that in response to the upswing in cases of violent attacks on individuals and government facilities in Anambra, with the approaching governorship election in the state, “you cannot out rule possibilities, inclusive of the possibility of declaration or state of emergency.”

One nexus links Chiwetalu’s arrest and Malami’s unconscionable statement: they cannot be supported by logic and common sense. Oduduwa is an insignia that Sunday Igboho and his separatist crew use as mascot. If the FG descends into another of its jaundiced decision to outlaw it, Yoruba people shouldn’t use the insignia of Oduduwa? What part of the Nigerian constitution forbids anyone wearing clothes or the colour combination that they desire? What evidence did the Army have that Agu incited the public on the side of IPOB? Agu has been known to always go nostalgic in references to Biafra. Yes, the Federal Government claimed it had outlawed IPOB, but did it outlaw Biafra? Biafra is a phoenix that cannot die, as long as the people in that geographical area remember their grueling fate in the hands of Nigerian soldiers.

Again, Agu is an actor and the Upper Iweka show might jolly well be a rehearsal for another film, as indicated by the vehicle he brought to the alleged locus incuo. More fundamentally, why  has the Army never felt that Sheik Gumi, who even accused it of systemic decimation of Islamic faithful, had breached “the imperative for peace and national security” thus necessitating the arrest of that campaigner for bloodthirsty hounds?

It is same partisanship that juts out of Malami’s emotive outburst. In the Southeast of Nigeria today, Imo State is where anarchy and total breakdown of law and order are mostly pervasive. That is a state superintended over by one of Aso Rock’s provincial lickspittles. How come the federal government has not declared a state of emergency there? A sizeable part of Niger State is in the hands of Boko Haram, while the president’s home state of Katsina appears to be Thomas Hobbes’ projection in his state of nature thesis. How come these states haven’t fallen victim of the emergency rule?

While most of these theoretical postulations by government are not wrong in themselves, the absence of equity in their operationality is the bother. In 1999/2000 when Gani Adams’ OPC was constituting a nuisance, Olusegun Obasanjo wielded the big stick, slamming him and Fredrick Fasehun, his own kinsmen, in jail for months. Buhari cannot be hounding IPOB and ethnic separatists while mollycoddling his bandit brothers who he has stubbornly refused to label terrorists