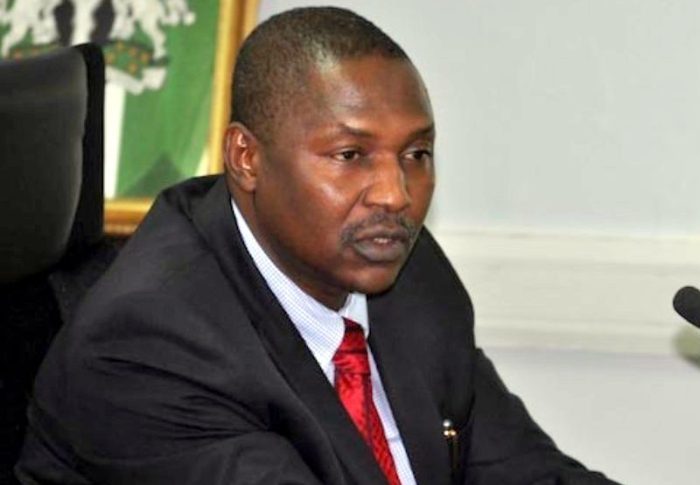 The Attorney-General of the Federation and Minister of Justice, Abubakar Malami (SAN), says he has petitioned the Inspector General of Police, Mohammed Adamu, over the persistent malicious publications against him by SaharaReporters through its online medium.

Malami, who disclosed this in a statement by Dr. Umar Gwandu, his Special Assistant on Media and Public Relations, in Abuja on Friday. said his lawyers, Sunday Ameh (SAN), and Co have forwarded the petition to the IGP.

The AGF in the petition wants the police to carry out comprehensive investigation into the motive behind the libelous and criminal defamation of his character, integrity and reputation by the medium.

He complained that his character and integrity as a senior lawyer had been maliciously lowered and brought into disrepute by the online publication.

He, also in the same vein, petitioned Omoyele Sowore, publisher of the offending publications, demanding an apology and retraction of the alleged criminal defamatory publications.

The petition reads in part: “For the records Sir, Malami is a second term Attorney General of the Federation and Minister of Justice who has been returned due to his exemplary leadership of the anti-corruption program of the administration of President Muhammadu Buhari.

“Under the supervision of Malami as Attorney General, the extant National Anti Corruption Strategy was conceived, designed, approved by the Federal Executive Council and is currently being implemented.

“Malami’s re-appointment as Attorney General is first of its kind and to our mind, a testimony of his unparalleled performance in Office, especially in driving the Anti-Corruption agenda of the Government among others.

“In sum, the libelous publications contained direct allegations and inuendos … Notwithstanding that the stories untrue and false; Sahara Reporters published the defamatory articles in issue malafide, with intention to ridicule our client before the whole world.

“Our client has since July 10, when the malicious criminal libel were first published, received and still receives several telephone calls and visits from well meaning Nigerians, his friends, well-wishers and associates from all over the world including those he has dealt with/still dealing with in his official capacity as Nigeria’s Chief Law Officer many of whom have expressed serious concerns as to his alleged conducts as reported by Sahara Reporters.

Similarly, the Attorney-General has written the publishers of Sahara Reporters complaining on the same alleged libelous and criminally defamatory publications.

He said: “Take notice that you are hereby issued a seven-day ultimatum to retract all the libelous and criminally defamatory publications, and cause to be issued a public apology to be published on your platform and on the front page of three newspapers with nationwide circulation for three consecutive days failing which we shall be left with no other option than to allow the law to take its course against your organisation.”