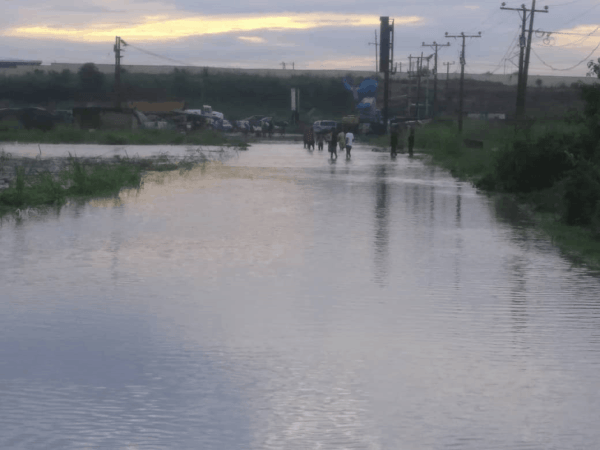 The restive community of Magboro has been thrown into mourning as a lifeless body of a middle-aged gas retailer, identified as Kingsley Ejike was seen along the flood plain in the community.
The News Agency of Nigeria reports that the torrential rain that started on Friday till the late hours of Saturday has submerged some houses and cut some roads within the community on the Lagos-Ibadan expressway.
Ejike, a gas retailer, who owns Kingsfield Gas at Magboro, was swept away by the flood resulting from Saturday’s downpour.
The groom-to-be got drowned in a flood around the Sparklight Estate area of the expressway in Ogun.
The bloated body of the deceased was discovered by the search party of Ilaje fishermen around High-Impact Sparklight Road on Sunday.
A witness claimed that Ejike could have fallen victim on his way to supply cooking gas to some of his customers around the estate on the evening of Saturday.
“There was a search party for the missing Ejike after we found his Motorbike on the flood plain without him,’’ the witness said.
A community leader and Ejikes customer, Tunde Oyebola, described the deceased as a dogged man, who often supplied gas to some residents on credit.
“I have known him for the past six years now. He does his business diligently and everybody loves him in my area.
“He is a nice and dogged man, who does his business in honesty. Sometimes, he supplies gas to us on credit to pay later,” the community leader said.
Oyebola said that the deceased loved his family and was the only one footing the bill of his aged mother who is down with stroke.
A resident, Bolaji Dada, however, attributed the cause of the flooded plains to the diversion of waterways by Julius Berger, the contractor handling the rehabilitation of the Lagos-Ibadan expressway.
He said the waterways were diverted to the community without making provision for another drainage to ensure a free-flow of flood during rain.
“The contractor should have provided waterways for the diversion, especially the Hi-Impact road.
“We will need the attention of the government to prevent further flooding of the community,’’ he said.
NAN reports that some communities within Magboro such as Oke-Afa, Oke Ayo, Gaun and adjourning communities are flooded as motorists and commuters are unable to pass through the high current flooded roads.
NAN reports that the Lagos Emergency Management Agency had, during a roadshow in August, assured of its readiness to tackle challenges of flood in the state.
Dr Oluwafemi Oke-Osayintolu, Director-General of the agency, had then spoken on the need to sensitise citizens on how best to prepare and mitigate flood.
He spoke against the backdrop of the prediction made by NIMET on the vulnerability of flooding in the latter part of this year.