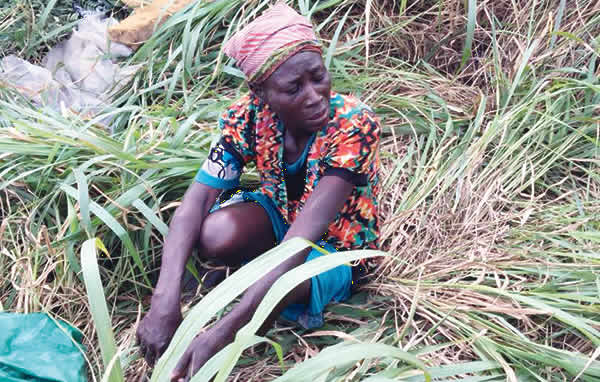 A woman alleged to be mentally deranged, Folake Falade, has denied knowing anything about human parts found in her possession in Aiyetoro, Cele-Nizer on the Lagos-Badagry Expressway.
The 40-year-old said the body parts found with her on August 27 belonged to men who usually had sex with her in a tunnel where she lived.
There had been turmoil in the community after some residents allegedly spotted the suspect, who was widely believed to be mad, making telephone calls.
A mob was said to have gathered and would have lynched her but for the intervention of some officials of the Lagos State Neighbourhood Safety Corps and policemen from the Ijanikin division.
The police were said to have recovered a skull, some decomposing human parts, photos, foot wares, among others from the tunnel.
The case was subsequently transferred to the State Criminal Investigation and Intelligence Department, Yaba.
Falade, who claimed to be from Abeokuta, Ogun State, said the body parts belonged to men who had sex with her after paying her between N200 and N300.
She said: “I was married to an Egun man who abandoned me. My only surviving child, Abiodun Jeriat, is with my husband. I had five other children, but they all died. I have been living in the place for about two months after I could not find my house at Mosafejo Ilogbo, Ogun State.
“On the day I was caught, I was sitting when a man came to offer me a gin. The second person came and asked if I had a mobile phone and I said no. Not long after, I saw some people with canes and they started beating me up. They also removed all the things I used to cover myself whenever it rained. They asked me if I took gin and I said once in a while.
“They asked where I used to get money to buy it and I told them that some men had been having sex with me and they gave me money – N200 or N300.”
A source said the suspect claimed that one of the photos was that of her child, who she did not know his whereabouts.
She was arraigned before an Ebute-Meta Chief Magistrate’s Court on two counts bordering on possession of human parts.
The charges read: “That you, Folake Falade, and others at large, on August 27, 2018, around 7am, at Aiyetoro, Cele-nizer, on the Lagos- Badagry Expressway, in the Lagos Magisterial District, did conspire among yourselves to commit felony, to wit: unlawful possession of human parts.
“That you, Folake Falade, and others at large, on the same date, time and place, in the aforementioned magisterial district, did unlawfully have in your possession severed human parts, charms and a picture of a boy, a supposed victim…”
The police prosecutor, Inspector Adedayo Oladele, said the offences were punishable under sections 411 and 238 of the Criminal Law of Lagos State, Nigeria, 2015.
Falade pleaded guilty to the charges.
At the resumption of the case for facts and sentence on Tuesday, the police prosecutor, Oladele, said forensic experts had visited the scene of the crime.
“The defendant was asked what happened at the scene. She said one of the men sleeping with her owned the human parts. She was asked to produce the men, but she could not,” he added.
There was a mild drama when the prosecutor asked the Investigating Police Officer from the SCIID to bring out exhibits recovered by the police from the scene.
The odour of the suspected decomposing human bodies filled the courtroom and the Chief Magistrate, O.O. Olatunji, ordered they be taken outside the court for inspection.
A court orderly and a friend of the court, who were appointed by the chief magistrate for the inspection, later returned to confirm the prosecutor’s evidence.
As Olatunji made to deliver his sentence, the suspect changed her plea.
“I was not found with any human skull and flesh. What they found on me was ponmo (cowhide), which I was cutting; I don’t know anything about human skull and flesh; they were found far from where I was. Some people beat me up, saying I had a phone, which I denied. It was ponmo they found on me,” she said in Yoruba.
Olatunji said since the defendant had changed her plea, she would be admitted to bail.
She was subsequently granted bail in the sum of N200,000 with two sureties in like sum as the chief magistrate ordered that the case file be duplicated for legal advice from the Directorate of Public Prosecutions.
The case was adjourned till September 26, 2018.
The PUNCH.