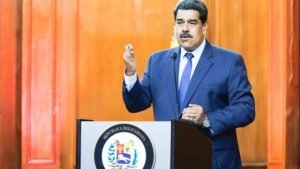 Venezuelan President Nicolas Maduro said he was looking into giving a Russian vaccine against COVID-19 to all candidates in legislative elections set for December 6 to allow them to campaign safely.

“I am proposing … to see if it’s possible to give the Russian vaccine to all … 14,400 candidates who have registered for the election … so that they can take to the streets and campaign from neighbourhood to neighbourhood safely,” Maduro said in a televised speech.

He added that the first vaccines from Russia would arrive for clinical trials this month, while other vaccines would arrive in October, without giving further details.

Russia in August became the first country to approve a vaccine against the new coronavirus, drawing scepticism because safe and effective injections often take years to develop due to a complex period of clinical trials.

Meanwhile, many Venezuelan opposition parties intend to boycott the elections, which they see as an undemocratic attempt by the embattled president to take control of the National Assembly, the only government institution still dominated by the opposition.

Maduro has presided over a massive economic crisis and political unrest that has sent five million Venezuelans fleeing abroad. (dpa/NAN)