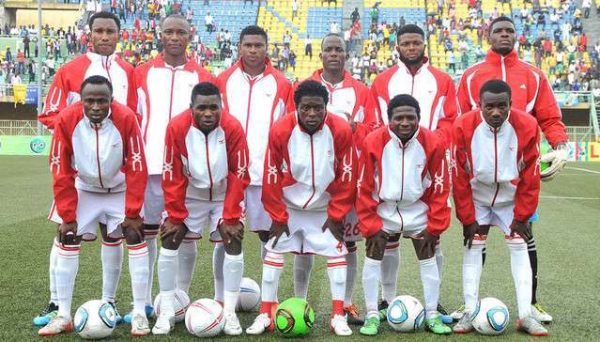 The League Management Company on Friday sanctioned Heartland Football Club of Owerri following crowd trouble which marred their Nigeria Professional Football League fixture against champions Plateau United.
The News Agency of Nigeria reports that the club’s fans attacked centre referee Yusuf Garba, who they claimed made a number of questionable calls.
Garba sustained injuries from the attack in the critthreeng8 fixture, which had ended in a 1-1 draw on April 22, and had to be treated at a nearby hospital.
The Owerri-based club side will now have to forfeit three points and play their next three home matches at the Dan Anyiam Stadium in Owerri behind closed doors.
In a series of tweets on Friday, the LMC revealed that it also fined the club N1.5 million.
It said this was for their fans’ encroachment after the game and their failure to restrict unauthorised persons to restricted areas during the match.
It stated: “For the assault on match officials, the LMC fined the club N1 million and ruled that they should pay N1.25 million as compensation to the match officials.
“Another N500,000 fine will be paid by Heartland for their failure to use and issue matchday tickets for record and crowd control purposes.
“They will pay another N1 million for issuing public statement capable of bringing the league to disrepute.
“For unfairly criticising and discrediting match officials who are officers or agents of the league, Heartland have also been fined N1 million.”
It also punished the club’s Team Manager, Mobi Oparaku, for his role in the incident.
The former Nigeria international has been suspended from all LMC activities for the next 10 games.
With the decision of the LMC, the former NPFL champions now face a tough task in maintaining their top-flight status as they sit in the last position on the table with 15 points from 18 games.
The club only gained promotion to the top-flight last season after spending a season in the Nigeria National League.
NAN also reports that the LMC had docked three points from Sunshine Stars earlier in the season for a similar offence.