Liverpool’s victory hailed as the ‘Miracle of Anfield’ 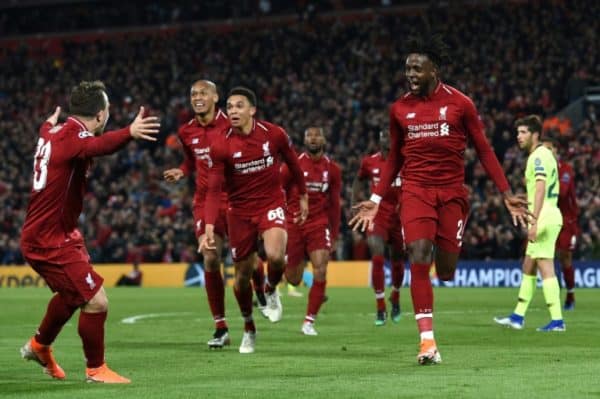 Share
Facebook Twitter LinkedIn Pinterest Email
Liverpool’s stunning 4-0 Champions League demolition of Barcelona naturally dominated the front and back pages of British newspapers on Wednesday with most going on a similar theme to the Daily Mail’s splash: “Miracle of Anfield.”
“An Anfield miracle transcribed from the pages of pure fantasy,” read the headline of the match report in The Independent, while The Guardian led with: “Out of this world.”
The Merseyside club’s sensational victory over what some pundits described as one of the best sides of the modern era allowed them to overturn a 3-0 deficit from the first leg of their semi-final.
There were some suggestions that Liverpool had topped the Miracle of Istanbul” when the club similarly overturned a three-goal deficit to beat AC Milan in the 2005 Champions League final to win their fifth European title.
European fixtures at Anfield have had a special atmosphere going back a lot further than that and some suggested the noise generated by a packed house combined with Juergen Klopp’s aggressive side had unsettled the Spanish champions.
“This is Liverpool’s gift: to rip up what you thought you knew about football and footballers, to take you — mentally and physically — to a place you don’t know and never wanted to go,” Jonathan Liew wrote in The Independent.
There was plenty of praise for the spirit and self-belief that Klopp has fostered in his team, the German even forgiven for using an expletive when praising his players after the match.
“Juergen Klopp makes Liverpool believe they can do the impossible,” wrote Matt Dickinson in The Times. “No one minded when Juergen Klopp dropped the f-bomb live on television.
“After this, he could have stripped off and run around Anfield with his pants down and it would all have seemed part of his manic Germanic charm. With that grin and this football, he can get away with anything.”
There was plenty of praise as well for Trent Alexander-Arnold’s quick-thinking from a corner that caught the Barcelona defence napping and set up the decisive fourth goal for stand-in striker Divock Origi.
“With 79 minutes gone, the most celebrated team of the modern age had been reduced to bunch of mooching, stumbling yellow-shirted spectators,” Barney Ronay wrote in The Guardian.
“A Champions League season that had seemed to be zeroing in on another coronation for Lionel Messi had been wrenched, gleefully, the other way.
It will instead be Liverpool in Madrid on the first day of June for another shot at the ultimate.”
The website of Spanish sports daily AS led with a quote from Argentine forward Messi in their headline: “It was a horror movie,” while rival publication Marca’s edition splashed: “Barcelona fail epically at Anfield.”
After Klopp and his players had stood, some in tears, in front of The Kop to celebrate the win with a rendition of the club anthem: “You’ll Never Walk Alone,” it was left to The Daily Mail’s Martin Samuel to point out that the job was not yet done.
“One had the feeling this was the moment he had been working towards since the day he set foot on Merseyside,” he wrote of Klopp.
“This spirit. This togetherness. This performance. This passion, this emotion: it was all here, every last drop of what he wanted to achieve.
“And yet, there is still such a long way to go.”
Liverpool face either Tottenham Hotspur or Ajax Amsterdam in the final on June 1.
Reuters/NAN.
Anfield FC Barcelona Liverpool Miracle of Anfield The Guardian UEFA Champions League
Share. Facebook Twitter Pinterest LinkedIn Tumblr Email