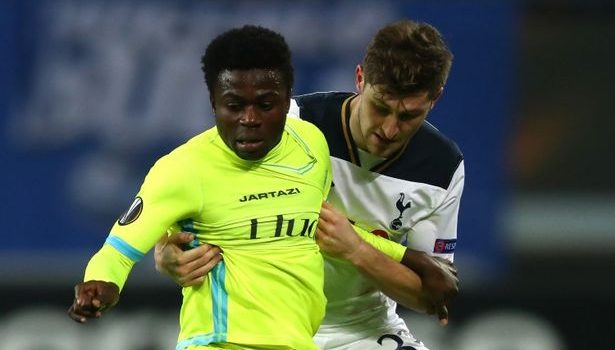 Liverpool are considering moving for Nigeria international, Moses Simon.
Simon, 22, is on the Reds’ shortlist for a potential summer switch as Jurgen Klopp remains keen on bolstering his forward line.
He has a year left on his contract with Belgian side Gent and is expected to command a fee of around £10 million, with other Premier League clubs interested, according to report.
He has been heavily scouted by Liverpool as they seek pacey backup to regular wide man Mohamed Salah and Sadio Mane.
Simon is capable of playing on either flank but spent much of this season on the left wing, where he contributed six goals and three assists in helping Gent finish in fourth in the Belgian Jupiler Pro League.
Simon suffered personal heartbreak last week when it was confirmed he would miss the forthcoming World Cup finals in Russia.
The player has been suffering from a hip injury, and while he is expected to be available in three weeks, Nigeria coach Gernot Rohr chose not to include him in his 23-man squad.
“I will definitely be back soon, stronger and better,” said Simon.
“To the Super Eagles, I wish you all the best of luck in Russia – go and make us proud.”

Segun Adebowale - January 19, 2020 0
The fire, which was still raging as at press time, began at about 7pm at U-turn area of Abule Egba, The Eagle Online is reporting. S