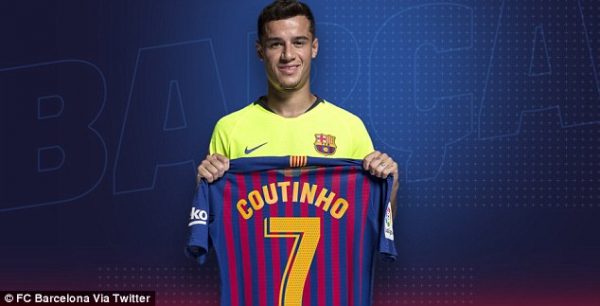 Share
Facebook Twitter LinkedIn Pinterest Email
Brazil’s Philippe Coutinho might be in line for a strange double on Tuesday night as he was whistled by some FC Barcelona supporters at the Camp Nou.
Now, he may well be booed by Liverpool FC fans at Anfield.
He goes back to Liverpool where he played for five years.
If he is not given a good welcome, it will match the send-off he received from FC Barcelona supporters when he was taken off in the first leg.
Ousmane Dembele’s injury in the game against Celta Vigo at the weekend means Coutinho will almost certainly start against the team he left in January 2018.
FC Barcelona will defend a 3-0 lead from last week’s first leg, and there will be no love lost during the game for the player.
This is a player who chose to leave Jurgen Klopp’s project just under a year and a half ago to join Lionel Messi and company at FC Barcelona.
Coutinho has struggled to win favour with FC Barcelona fans this season.
He played well against Manchester United in the second leg of the quarter-finals and scored.
But he soured what had been his best Nou Camp performance in a FC Barcelona shirt that night by putting his fingers in his ears when celebrating.
It was a protest at what he saw as a lack of respect and patience from supporters.
But it made things worse and in the next home game he was whistled when taken off against Real Sociedad.
The recriminations seemed to have been forgotten in the next home game when he hit the bar with one free-kick and played well against Levante as FC Barcelona won the league.
But when he was taken off by coach Ernesto Valverde against Liverpool, there were more jeers and whistles from home supporters.
FC Barcelona captain Lionel Messi stuck up for the Brazilian in his post-match interview.
He said: “It’s ugly that they whistle a team-mate like this. We are all in this together. We have to be united to the end because we are close to our objective now.”
Messi is not the only player to have come out in support of Coutinho.
After his fingers-in-ears protest, Luis Suarez said: “The smallest thing that you do — and what Philippe did the other day was tiny — gets magnified.”
Suarez will also be going back to Liverpool for the first time in a competitive game since he left the club in 2014.
He celebrated his goal against them at the Camp Nou, although as he made his way back to the centre-circle there was also an apology.
It was aimed to the away fans high in the Camp Nou.
Suarez and Coutinho were team-mates when Liverpool so nearly won the English Premier League under Brendan Rodgers in the 2013/2014 season.
Now they stand on the brink of a potential treble in Spain.
It would be the second of Suarez’ career at FC Barcelona, after he also managed it in his first season with the Catalans.
The Uruguayan and the Brazilian were close friends at Liverpool and still have former team-mates, such as Jordan Henderson, in the current Liverpool line-up.
There will be no love lost on Tuesday and that may also extend to the stands where Liverpool supporters might forget their fondness for two former sons, if only for 90 minutes.
dpa/NAN.
Anfield Camp Nou FC Barcelona Liverpool Philippe Coutinho
Share. Facebook Twitter Pinterest LinkedIn Tumblr Email