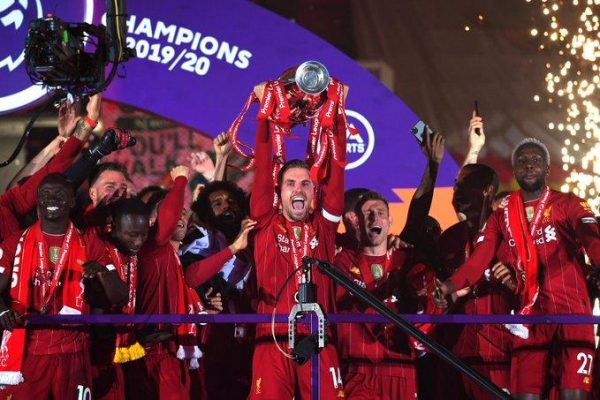 And Liverpool celebrated their triumph after their final home game of the season, receiving the trophy during a special ceremony in the iconic Kop stand after a dramatic 5-3 win over Chelsea.

As fans let off flares and fireworks outside the stadium, club legend Sir Kenny Dalglish handed the trophy to Henderson, who has now lifted the Champions League, UEFA Super Cup, FIFA Club World Cup and Premier League as Reds skipper.

With a trademark shuffle of the legs, the Reds skipper emphatically raised the trophy to the sky while surrounded by his teammates and Liverpool’s backroom staff.

Ahead of Liverpool’s match with Chelsea, Henderson spoke of how being handed the trophy by Dalglish – who won multiple league titles as a player and manager at Anfield – “makes it even more special”.

“He’s an iconic figure at this football club, a huge person who we all love,” the central midfielder told BBC Breakfast.

Though he has been a mainstay in Jurgen Klopp’s side, the 30-year-old missed the Reds’ last two matches with a knee injury and took no part in the game with the Blues.

Henderson has been a big miss from the starting XI, with the Reds being held to a draw with Burnley and losing to Arsenal before the thrilling win over Chelsea.