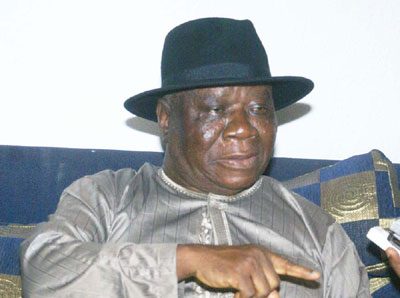 An elder statesman, Chief Edwin Clark, has urged President Goodluck Jonathan to reply and address allegations levelled against him by former President Olusegun Obasanjo in the national interest.
Clark, who attended the Nigeria Centenary Lecture in London on Tuesday, told newsmen that the allegations, “though false”, were too weighty for Jonathan to ignore.
“Jonathan should reply the letter not because of Obasanjo, but for the sake of Nigerians,” Clark said.
Obasanjo in an 18-page letter, last week, accused the government of condoning malpractice.
Clark, an Ijaw leader and a staunch supporter of the current administration, said Obasanjo’s letter showed disrespect to the person and office of the president.
He added: “My advice is for Jonathan to remain firm and strong as the president of Nigeria and continue with his transformation agenda.”
The letter has continued to generate mixed reactions from Nigerians in Europe, with most Nigerians and analysts describing it as the “beauty of democracy”.