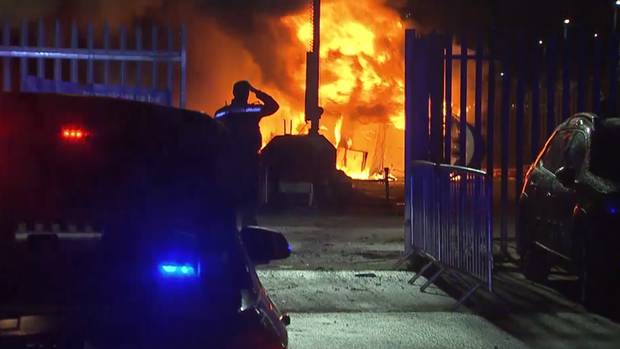 Leicester City owner and chairman Vichai Srivaddhanaprabha is feared dead after his helicopter crashed on Saturday night outside of the King Power Stadium.
The crash happened shortly after Leicester’s draw with West Ham.
Emergency services were quickly on the scene after witnesses saw the craft go into a spin after taking off, according to Sky Sports.
The BBC is reporting that the owner, his daughter, two pilots and one other unknown person were in the helicopter at the time of the crash.
No confirmation has been given of if anyone survived the incident.
“We are assisting Leicestershire Police and the emergency services in dealing with a major incident at King Power Stadium,” a Leicester City spokesman said in a club statement. “The club will issue a more detailed statement once further information has been established.”
Srivaddhanaprabha, who bought Leicester City in 2010, is hugely popular at the club having funded the Foxes through their fairy tale Premier League success in 2015-16, when they were 5,000-1 to win the title at the start of the season.
Supporters were laying tributes to the Thai businessman on Sunday morning in a solemn atmosphere outside the King Power Stadium as they awaited further information on exactly what happened.
Leicestershire police tweeted: “We understand that many people are waiting for an update about the helicopter crash at King Power Stadium last night. We are working with a number of other agencies to get an update out to the public and press. Thank you for your patience and all your messages of support.”
Meanwhile, details have emerged from eyewitnesses on what caused the helicopter crash, with engine failure sounding like a possible cause for the incident.
“The engine stopped and I turned round and it made a bit of a whirring noise, like a grinding noise,” freelance photographer Ryan Brown told BBC Radio Leicester.
“The helicopter just went silent, I turned round and it was just spinning, out of control. And then there was a big bang and then [a] big fireball.”