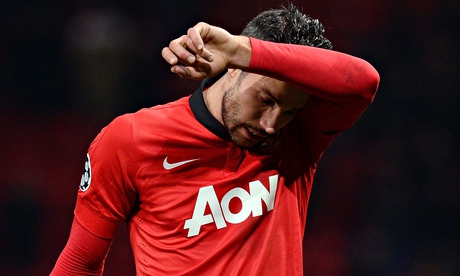 Two penalties and a sending off saw Leicester City come from two goals down to defeat Manchester United at the King Power Stadium.
Robin van Persie bagged his first Manchester United goal of the season as Falcao’s perfectly timed cross found its way to the Dutch international who headed it into the back of the Leicester City net.
United doubled their lead three minutes later when Di Maria’s floating chip soared past Kaspar Schmeichel.
City immediately responded to United’s second goal as Jamie Vardy’s cross found its way to Leicester’s top scorer Leonardo Ulloa, whose bullet header glided past De Gea.
Falcao came close early in the second half after his shot, assisted by Wayne Rooney, ricocheted off the crossbar.
Herrera made it three for United in the 56th minute.
David Nugent converted the first of Leicester’s two penalties in the 60th minute and matter of moments later, Esteban Cambiasso’s poweful shot gave the Foxes a well deserved equaliser.
To make Manchester United’s problems even worse, Jamie Vardy made it four for the Foxes 12 minutes from time.
The second penalty saw Tyler Blackett see red and Ulloa’s perfectly taken spot-kick sealed the points for the fighting Foxes.