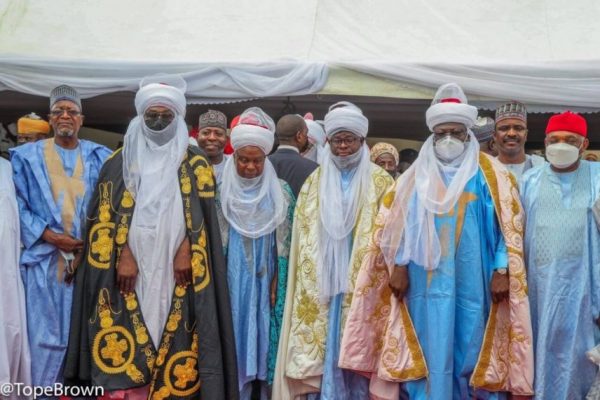 The Kwara State Governor, AbdulRahman AbdulRazaq, was on Sunday turbaned the Kaura Kaiama, the defender of Kaiama Emirate, to reward his administration’s developmental strides in the area.

AbdulRazaq was turbaned alongside Senate President Ahmad Lawan, who bagged the title of Magayaki Kaiama.

Also turbaned was the representative of Kwara North Senatorial District, Sadiq Suleiman Umar, who was enrobed as Dan-Amar, meaning the beloved Prince of Kaiama.

Attended by several federal and state parliamentarians and other dignitaries from across Nigeria, the colourful royal turbaning brought the ancient Emirate to a standstill amid trumpet blaring and horse parade.

The Emir of Kaiama, Alhaji Muazu Shehu Omar, said the awardees were chosen based on their rich contributions to the growth of the Emirate, expressing his joy and gratitude for the honour of their presence.

“Your Excellencies, the titles being conferred on you today are a token of the community’s genuine recognition and appreciation of your positive contributions to the progress of our people,” he said.

The Emir, who spoke through the Mutawali of Kaiama, Alhaji Abdulrazaq Umar, acknowledged the federal and state governments’ ongoing efforts at fixing the Kaiama-Kishi Road.

The state government is already fixing a stretch of the over 64km road that connects Kaiama to southwestern Kishi town in Oyo State.

“We are aware of your frantic efforts to get the federal government to complete the Kishi-Kaiama road which was stalled before (the Governor) took over the mantle of government in 2019,” the Em”ir said, adding: “Part of the success story of the renewed efforts of the Governor, the distinguished Senator Sadiq Umar and other stakeholders and friends of Kaiama is the recent approval of over N24 billion by the Federal Executive Council for Kaiama-Kishi Road project.”

Lawan lauded the Emirate for finding him worthy of the title, and identified with the performance of Senator Umar in the Senate.

He said: “Today is historic for us.

“We have been bestowed with titles of Kaiama Emirate.

“To be specific, I have been turbaned as Magayaki Kaiama.

“I want to express my gratitude to our royal father and the emirate council for finding me worthy of this very important title.

“Your Royal Highness, I deliberately decided to drive from Ilorin to Kaiama through Kishi-Kaiama Road, which I know is not good.

“On Wednesday, last week, the Federal Executive Council approved the construction of this road to the tune of over N24 billion.

“I will start my work as Magayaki Kaiama by chasing for the funds available to the contractor to ensure that this road is rehabilitated in Shaa Allaah.”

AbdulRazaq, for his part, thanked the Emir and the entire people of the Emirate for the honour done to him and the Senate President, saying that action serves as tonic to continue to improve the people’s well-being.

“On behalf of my family and the government of Kwara State, I express my profound appreciation to His Royal Highness the Emir of Kaiama Alhaji Mu’azu Shehu Omar (Kiyaru IV) and the entire people of this great emirate for honouring me with the title of Kaura Kaiama,” he said, adding: “We are similarly grateful to Your Royal Highness for honouring my brother, the Senate President, with the title of Magayaki Kaiama.

“This is a testament to the hospitality of the people of Kwara State.

“We take this honour as a tonic to do a lot more to change the narrative of underdevelopment that had plagued this part of the Great Old Borgu Emirate.

“I am proud to say that this administration has in less than three years constructed more asphalt roads in Kaiama than it met in the entire local government area.”

Some of these roads, according to the Governor, are General Hospital Road; asphalt upgrade of the Emir’s Palace Road; Gweria Township Road; and ongoing Kishi-Kaiama and Bani Township Roads.

AbdulRazaq added: “We have fixed health centres and rehabilitated the water works.

“There are also dozens of school rehabilitation projects in Kaiama.

“For instance, we have turned around the Government Unity Secondary School.”

The Governor assured the people of Kaiama of his commitment to justify the royal confidence reposed in him by continuously working with the traditional ruler and the security agencies to make Kaiama and entire Kwara State inhabitable for criminal elements and putting in place necessary infrastructure to promote large-scale agribusiness.

Senator Umar said his turbaning alongside other awardees was a rare privilege, thanking the Emir for his love and support at all time.

He said: “Let me specifically thank the Emir of Kaiama who is not just my brother but also a source of support.

“He has turbaned me alongside the two gentlemen who I see as sources of inspiration and support to me because of their extraordinary strength of hard work, sacrifice, focus and progressive minds.”

The event was also attended by many first class traditional rulers led by the Etsu Patigi, Ibrahim Umar Bologi II.