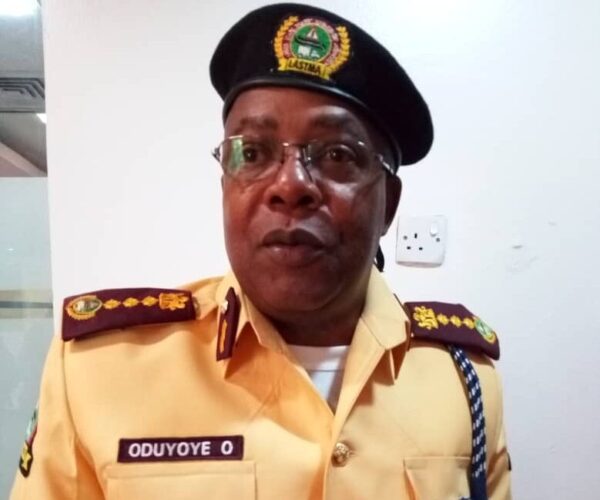 The Lagos State Traffic Management Authority has admonished motorists in the state to adopt a change of attitude, warning that the authority will no longer be merciful to traffic law violators.
The General Manager of LASTMA, Olajide Oduyoye, gave this warning in an interview with the News Agency of Nigeria on Tuesday in Lagos, while highlighting the authority’s agenda for the year.
Oduyoye said: “What we are looking at this year is for the citizens of Lagos and the motorists, including passengers, to understand that the issue of violating traffic laws is going to be totally unacceptable.
“It is time for a change of attitude.
“Passengers should not encourage recalcitrant drivers to do the wrong thing on the road because there will be no mercy when they are caught doing the wrong thing.
“Most especially those offences that impinge on the safety of other road users for example, driving against traffic, speeding, parking on walkways which forces pedestrians to walk on carriageway as opposed to walking on walkways.”
The LASTMA boss said Governor Babajide Sanwo-Olu had been on the side of the authority to “seriously and steadily” tackle the problem of traffic gridlock in the state.
According to him, Sanwo-Olu has empowered a crack team named Special Traffic Management Team, comprising all law enforcement agencies in the state and being spearheaded by LASTMA to deal with gridlock.
He said the traffic enforcement team headed by LASTMA comprised the Lagos State Neighbourhood Corps, Lagos State Environmental Sanitation Corps and Kick Against Indiscipline.
Oduyoye added that the team also included the Nigerian Police Force and OP MESA.
He said: “This crack team will deal with all the menace of environment nuisance and traffic gridlock.
“The governor has also provided means of transportation for the officers to move from point to point.
“LASTMA is also more geared to ensure more visibility on the roads.
“The authority has trained another 1000 officers to increase personnel in all the zones.
“Furthermore, the authority will soon launch its Traffic Management Solutions device.
“This will lessen the interactions between LASTMA officers and traffic offenders on the road to end traffic gridlock.”
Oduyoye added that technology would help the authority to achieve a lot more this year.
He said: “A lot is expected of LASTMA.
“We are hoping to have a central place where we can monitor what is going on on the road.
“We are going to introduce drones after approval.
“The drones will go out to capture the gridlock areas and send information to the command area so that officers can be deployed.
“The technology will make LASTMA’s operations 21st century.
“When you take your vehicle out, do not have the mind that you want to violate traffic laws and get away with it because our officers are now being trained and retrained to ensure that they do their jobs diligently and effectively.”
Oduyoye said the device would capture traffic offenders by taking pictures and video clips and send it in record time to data processing centre for analysis and fines.
The LASTMA boss said by 2021, LASTMA would be on a different level in traffic management.
Oduyoye commended Sanwo-Olu’s reconfiguration of junctions and roundabouts, saying the improvement of junctions like Allen, Lekki Second Roundabout, Ikotun and Maryland would go a long way to reduce traffic in the state.
He said LASTMA had identified 60 gridlock-prone areas in the state.
He said: “There are 60 junctions that have been highlighted as being regularly gridlock-prone areas, but we cannot deal with the 60 junctions simultaneously, so we are going to pick them up in phases.
“The first phase we are tackling are Yaba, Oyingbo, Ketu, Iyana-Ipaja, Ikorodu Roundabouts, Ajah and Maryland.
“So, it is not business as usual.”
NAN.