The Lagos State Emergency Management Agency said 30 shops, six bungalows destroyed by fire on Saturday afternoon in Lagos had been pulled down.

The Director-General, LASEMA, Dr. Olufemi Oke-Osanyintolu, made this known after the LASEMA Response Team, Lagos State Fire Service and other agencies put out the fire which started at 2pm.

He explained that the buildings, some shops and other property were destroyed in the fire incident at 16, Ladipo Street, Mushin, Lagos.

Oke-Osanyintolu said the agency received distress calls to the 767/112 at about 2pm, adding that when they got to the scene of the incident, they discovered that a mattress shop was the initial source of the fire.

“The enumeration of the affected buildings are as follows: a single storey building with six rooms and four shops, five bungalows with 26 shops; a bungalow with a three-bed room flat.”

The LASEMA boss added that the affected buildings had been completely levelled to the ground under his supervision.

Oke-Osanyintolu said the operation had been concluded and the response teams were heading back to base.

According to him, members of the public are warned to take reasonable safety precautions to reduce the risk of fire outbreak in their places of business and homes.

He said investigation was ongoing to determine the cause of the fire.

The News Agency of Nigeria reports that Uche Odinaka, who sold materials for chairs, said she lost all her goods in the fire.

Another trader, who sold mattress, Toyin Dada, said she could not describe how the fire happened, adding that all her mattresses, mattress covers and shops were destroyed in the fire.

Dada appealed to the Lagos State Government to assist the affected people to start business again. 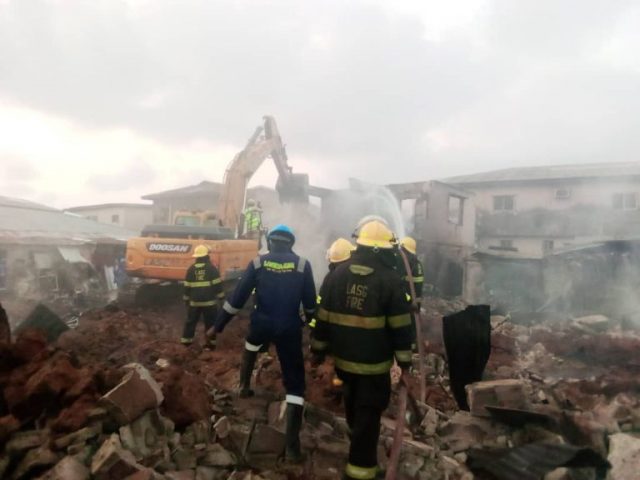