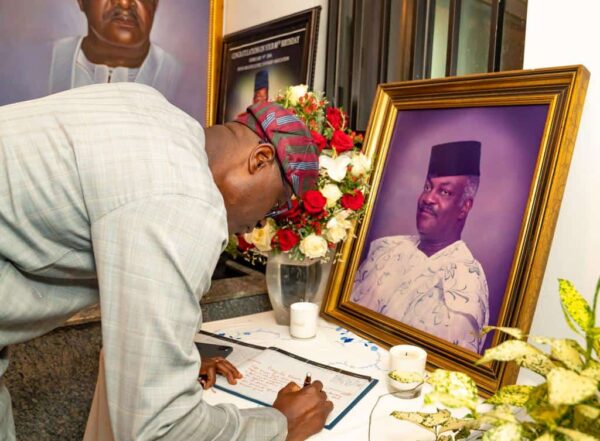 The Lagos State Governor, Babajide Sanwo-Olu, on Thursday paid a condolence visit to the family of the late former Military Administrator of the State, Brigadier Mobolaji Johnson (retd), who passed away on Wednesday evening.

At exactly 6:19pm, a high-powered delegation led by Sanwo-Olu was received by family members at the deceased’s residence in Ilupeju.

The Governor was accompanied by his Chief of Staff, Tayo Ayinde; Head of Service, Hakeem Muri-Okunola; and an All Progressives Congress leader in Odi-Olowo/Ojuwoye Local Council Development Area, Prince Bayo Osiyemi.

None of the immediate family members of the late former administrator was around when the Government delegation visited.

Before the late Johnson breathed his last on Wednesday, his wife, Obafunmilayo, had passed on a few years ago.

At separate occasions, Governor Sanwo-Olu spoke to Seyi and Deji, two sons of the deceased, on telephone to sympathise with the family.

There were other extended family members of the deceased at the late Johnson’s residence when the Governor visited.

In his tribute to the late Johnson, Sanwo-Olu described the former Military Administrator as “perfect officer and gentleman personified”.

The Governor wrote in the condolence register: “Papa served Lagos State diligently and conscientiously, laying a solid foundation that our dear State is thriving on. Lagosians remain indebted to Papa. His legacies outlive him. May his gentle soul rest in peace.”

Sanwo-Olu spent about 40 minutes in the living room of the late former Lagos Military Administrator, condoling the deceased’s family members.