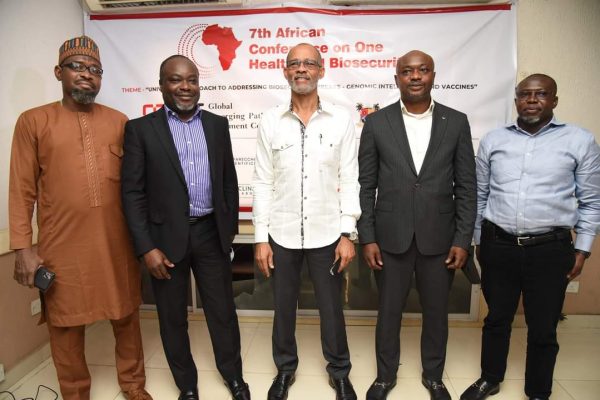 As part of efforts to ensure that the Africa continent improves on its preparedness and brace up to the challenges posed by emerging infectious diseases and biosecurity threats, the Lagos State Government through the Ministry of Health in partnership with a non-governmental organization, Global Emerging Pathogens Treatment Consortium (GET), is set to hold the seventh Annual African Conference on One Health and Biosecurity.

The Conference themed: “Universal Approach to Addressing Biosecurity Threats – Genomic Intelligence and Vaccines” is scheduled to hold at the Civic Centre, Lagos between Wednesday 27th and Friday 29th October, 2021.

Giving details about the conference at a news briefing on Wednesday, State Commissioner for Health, Prof. Akin Abayomi said that the conference is the seventh in series of conferences organized by GET in partnership with government around West Africa and the African continent to help develop biosecurity road map and to increase resilience towards building the capacity to deal with pathogens of high consequence.

He said: “This is the seventh time we’ve had this conference in West Africa, the first one was in Dakar, Senegal in 2015 during the Ebola outbreak, subsequently we had the next meeting in 2016 in Lagos which was an opportunity for  international development partners to help Lagos develop a biosecurity road map, recognizing the significant vulnerability of mega cities in Africa and in an attempt to increase their resilience towards building the capacity to deal with pathogens of high consequence just like Ebola, Lassa fever, Marbog pandemic flu and the current pandemic – COVID-19.

The Commissioner explained that the need to continually emphasize the key importance of the African response in combating Emerging Infectious Diseases, advocating various treatment strategies and preparedness against future biosecurity threats informed the need for the Conference.

“In the light of the recognition that a mega city like Lagos is very vulnerable to contagious diseases, GET has been collaborating with government agencies and hosting the Biosecurity conferences.

“Lagos has teamed up once again this year with GET to organize the seventh African Conference on One Health and Biosecurity. We have a very important thematic initiative this year to address the universal approach to biosecurity threats using genomic intelligence and vaccine”, he stated.

He explained that genomic intelligence is the ability to sequence a pathogen that is causing an outbreak, adding that COVID19 is the focus of attention for the conference.

The Commissioner noted that the Lagos State Government has equipped the Lagos State biobank with advanced technology including a sequencer, such that the State can sequence the COVID19 virus in the light of the multiple waves being experienced.

“We want to understand how the virus is changing. We have heard about the Delta, Alpha, Delta plus variants and so many other variants that are emerging out of this pandemic. It is critically important that we understand these variants that are arriving in Lagos and Nigeria through our airports, it is equally important that we know how the virus is transmitted through the community and how it is changing itself.

“The virus is always trying to gain advantage, it is a battle between the genetic material of the virus and the genetic material of the people that are vulnerable to the infection. Ultimately one will win; either the human being will overcome the virus or the virus will overcome the human being, therefore this kind of information is very important for us, we call it genomic intelligence. It gives us advanced information and knowledge about how this virus is changing and what to expect overtime”, Abayomi said.

Abayomi noted that genomic intelligence should be vigorous, with significant measures taken to mitigate the potency of current and future epidemics as well as keeping up with effective vaccine production.

While emphasizing the key importance of the African response in combating Emerging Infectious Diseases, Abayomi advocated for various treatment strategies and preparedness against future biosecurity threats.

He stated that Lagos is prepared to welcome participants, policymakers, researchers, scientists and other interested persons to the conference adding that the concept of One Health is necessary for ensuring biosecurity and all-around health.

Earlier in his remarks, the Chief Operating Officer of GET Consortium, Dr. Ayodotun Bobadoye explained that participants at the conference which will hold both virtually and physically will include policy makers, scientists, researchers, health care professionals, experts in infectious disease management, professionals from one health fields, development partners, community and opinion leaders amongst others from within and outside the continent.

He urged interested members of the public to visit the GET website to register and attend the hybrid conference physically or virtually.

He opined that resolutions at the conference will help chart a positive course for strategic response against Biosecurity threats in Africa and by extension the world.