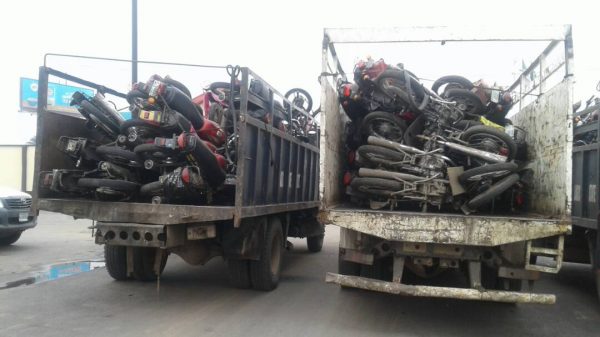 The operatives of the Lagos State Task Force over the weekend impounded 98 commercial motorcycles plying restricted routes within Apapa.
The Chairman of the Agency, SP Olayinka Egbeyemi, disclosed that the enforcement operation was carried out on the directive of the Lagos State Commissioner of Police, Edgal Imohimi.
Egbeyemi disclosed further that the enforcement operations was carried out after several warning issued to commercial motorcycle operators to desist from operating on restricted routes, particularly on highways and bridges.
Egbeyemi stated that the government was not comfortable with the flagrant abuse of law by commercial motorcycle operators, coupled with report of crime incidents allegedly perpetrated with use of okada, particularly around Apapa, Mile 2, Festac, 2nd Rainbow, Ijesha and Orile-Iganmu.
He said: “These commercial motorcycle operators, no doubt have been a sort of menace as their public nuisances and criminal activities at any time of the day is becoming alarming particularly at Apapa and its environs.”
The Chairman stressed that while some of them harassed innocent members of the public at various bus stops around Coconut, Wharf, Tin Can Island and Apapa GRA, others engaged in all sorts of criminal acts by dispossessing their passengers of valuables and also robbing innocent motorists during traffic.
He hinted that the commencement of repair work at over 3,000 capacity “ABAT Truck Terminal” in Orile-Iganmu and other on-going roads constructions/rehabilitations around Apapa axis were part of Governor Akinwunmi Ambode’s efforts to permanently address the perennial traffic around Apapa.
The Chairman advised commercial motorcycles unions to screen and weed out those criminal elements amongst them and to properly educate their members on the need to strictly adhere to the laws.
Imohimi has also told Egbeyemi to focus his operations more within Apapa until this menace is totally eradicated.
Egbeyemi appealed to residents of Apapa to cooperate with the Taskforce during the exercise and be free to contact him for useful information to rid this menace.
A motorist who simply identified himself as John commended Imohimi for his prompt enforcement directive to check illegal activities of these commercial motorcycle operators around Apapa.
According to John, those commercial motorcyclists who drive against traffic are fond of smashing side screen and mirrors of vehicles that are on the right of way even knowing that they are at fault.
A resident, who refused to identify herself, said: “We appreciate the action of CP and we are ready to cooperate with Taskforce as most of these commercial motorcyclists are illegal Aliens from neighbouring countries.”