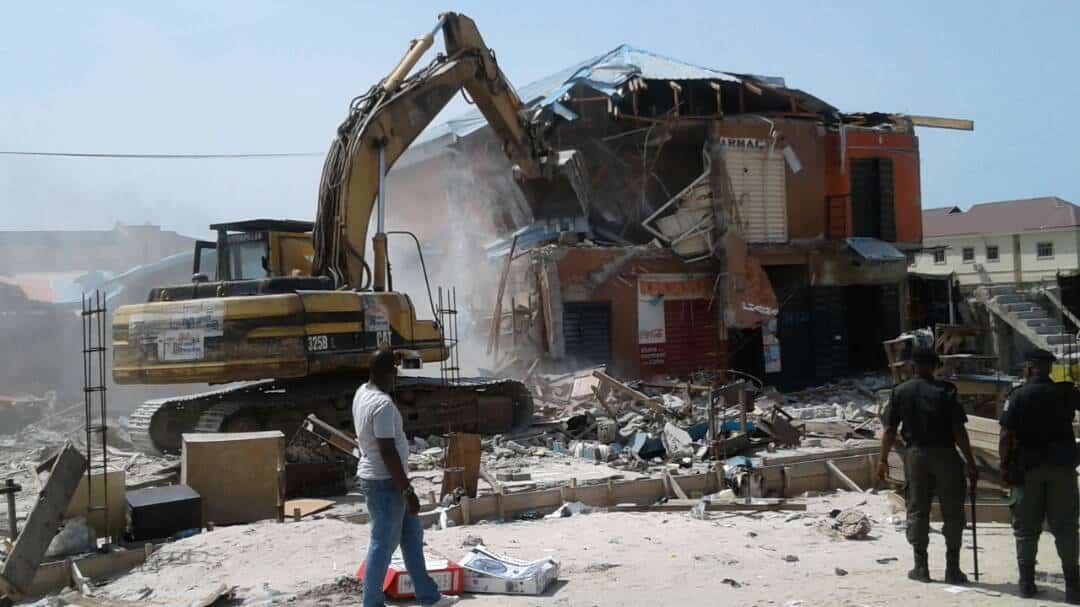 The Lagos State Government’s Task Force has dismantled no fewer than 120 shops and illegal structures in Itedo area of Lekki Phase 1.
The head of the Task Force, Superintendent of Police Olayinka Egbeyemi, led the operation.
The spokesman of the Task Force, Taofiq Adebayo, said the 120 illegal shops and other structures were constructed under high-tension electricity cables.
The owners and users were said to have received six months Demolition Notice. Egbeyemi said owners and occupiers of the illegal shops and structures were served a reminder Demolition Notice four weeks ago by the government.
He said: “Radiation from these high tension cables poses serious danger to human health, no responsible and responsive government would put any of her citizens lives at risks.
“The illegal shops including structures constructed under high tension cables are a sorry sight with miscreants and hoodlums freely smoking marijuana.”
Egbeyemi urged them to take advantage of the newly introduced “Rent-To-Own” housing policy scheme of Governor Akinwunmi Ambode, which has more than 4,355 fully equipped housing unit spread across the state.
He said the housing policy was meant to alleviate the housing problem of both low and middle-income earners and to equally discourage people living in any restricted area.
Egbeyemi also urged traders and middle income earners to apply and benefit from the N25 billion Lagos State Empowerment Trust Fund scheme, which is intended to help residents grow and scale their micro small/medium enterprises with N500,000 to N5 million soft loan.
He urged Lagosians to stop trading at restricted areas, including under high-tension cables.
He also urged both owners and occupiers of shops and structures constructed under high-tension cables across the state remove them as the demolition exercise would be extended to other areas.
A resident of the area, Dr. Femi Ololade, commended the government for saving the lives of both traders and residents living under high-tension cables.
Ololade made reference to an incident where no fewer than seven persons died when a high-tension cable fell on a viewing centre in Calabar, Cross Rivers during a football match.
He urged citizens to co-operate with the government and stop endangering their lives.

Kwara to revoke 5,000 plots of land allegedly sold illegally by...

Oluwo, Agbowu face-off does not edify revered stools of our forebears...