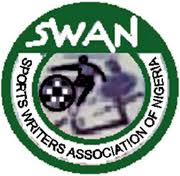 The Sports Writers Association of Nigeria, Lagos State Chapter, has called on club owners and managers in the Nigerian Premier Football League to exercise caution on the issue of the tenure and mandate of the League Management Company, advising that any attempt to frustrate or abort the ongoing reforms would throw the league and Nigerian domestic football back into the dark recesses, which the league has just emerged from.
The Lagos SWAN statement, jointly signed by its Chairman, Fred Edoreh, and Secretary, Emma Njoku, was in reaction to the communique issued after a meeting of some club owners and managers in Abuja on Wednesday, purportedly dismissing the LMC.
The statement reads: “We are a bit disgusted with the call, so early in the day, for the dissolution of the League Management Company when it is working so hard to re-invent the Nigerian premier league system and is steadily achieving laudable results and inspiring the confidence of both the public and existing and potential investors.
“While we respect the place of the clubs owners and managers as critical stakeholders and their right to have a say in the running of the league, we must also respect the authority of the Nigeria Football Federation as the ultimate governor of football in Nigeria by which it licenced the LMC to manage the league following the endless squabbles and confusion that trailed the it while in the hands of the defunct league boards.
“We have seen the remarkable results posted by the LMC in its efforts to unleash the potentials and achieve greater value for the league and we believe that any attempt to bring back the old politics which hitherto constrained the system would be retrogressive.
“We believe that given the effectiveness of the new order, the clubs owners/managers would do themselves and Nigerian football a world of good to concentrate in strengthening their clubs while the LMC continues to provide the good management it is currently providing until the NFF decides further on the future of the LMC. The league has suffered so much in recent past and it is only reasonable that we allow the LMC to continue its good works rather than drawing it back into the familiar vicious circle of unnecessary politics.”
The statement however also called on the NFF to engage and communicate with the clubs owners and managers more openly to articulate the league reform programme so as to achieve a general consensus among stakeholders to avoid discordant tunes, which can derail the process, discourage sponsors and turn off football enthusiasts.