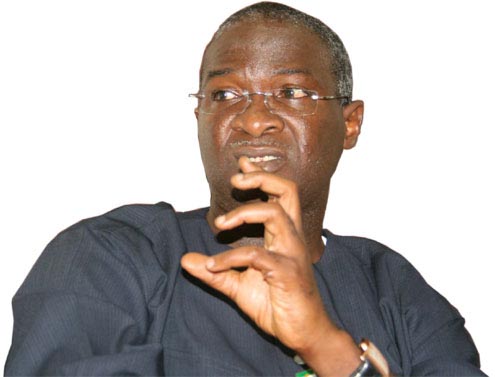 No fewer than 135 buildings collapsed in Lagos in the last seven years, the state’s Tribunal of Enquiry on Building Collapse said on Monday.
The chairperson of the tribunal, Abimbola Ajayi, said this while presenting the tribunal’s report to Governor Babatunde Fashola in Ikeja.
The tribunal was constituted by the state government on May 20, following the spate of collapsed buildings in the state.
It had a defined brief to unravel the causes of the problem and come up with recommendations within three months.
Ajayi said that 130 cases were recorded before the tribunal was inaugurated while five buildings collapsed after it was set up.
The chairperson described the situation as disturbing, saying a holistic approach was urgently needed to arrest the development.
She explained that the tribunal discovered that the problem endured because most building projects were handled by quacks.
According to her, the poor enforcement of the state’s building control law has also contributed to the menace.
Ajayi said: “Crass indiscipline and gross corruption by all stakeholders have added to the problem as they have rendered the relevant laws ineffective.
“The 2010 Building Control Law empowers the relevant government agencies to act and stop the menace, but the system does not, because of political, cultural and administrative reasons.”
Ajayi also blamed the problem on the passive stance of law enforcement agencies and the Ministry of Justice to the arrest and prosecution of violators of building control laws.
“Although there is the provision for summary trial of violators and offenders in the laws examined by the Tribunal, there is no record of persons prosecuted or sanctioned for incidents of building collapse by the Ministry of Justice, Nigeria Police and any other known organ,” she said.
The chairperson expressed the confidence that the tribunal’s report and recommendations would help address the menace, if well implemented.
Ajayi thanked the state government for setting up the tribunal, saying the step showed its determination to protect the lives of residents.
Accepting the eight volume report, Fashola commended the tribunal for the effort and pledged strict implementation of the committee’s recommendations.
He described the spate of collapsed buildings in the state as worrisome, and promised that his administration would explore all efforts possible to address the problem and protect lives.
Fashola said: “”It is the responsibility of the government to ensure that no life is lost in circumstances that are avoidable.
“For us, human life is very important and the most important thing that we have and we will do everything within our capacity to nurture it to the fullest.”
The governor, however, said tackling the problem should not be left to the government alone, and sought the cooperation of stakeholders to address the menace.
Fashola urged residents to comply with the state’s building laws, and charged professionals to always abide by regulations.
The governor said the problem would be reduced substantially if professional associations sanctioned members involved in construction of defective buildings.
Fashola said the government had declared war against violators of building laws and officials had been directed to monitor such activities for necessary actions.