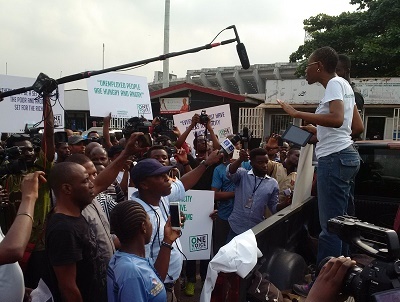 The anti-government protest being held in Lagos State has commenced despite the presence of fully armed policemen in Hilux vans and Armoured Personnel Carriers.
Available information has it that popular musician, Charles Oputa, also known as Charly Boy, and the Publisher of Sahara Reporters, Omoyele Sowore, are at the head of the protest.
The protest, which was scheduled to commence at the National Stadium, Lagos, was delayed following the presence of policemen who did not allow the protesters have access to the venue.
So also is available information indicating that fully armed policemen have taken over Freedom Square in Ojota, Lagos State as early as 8am.
The protesters are agitating for better living conditions for Nigerians.