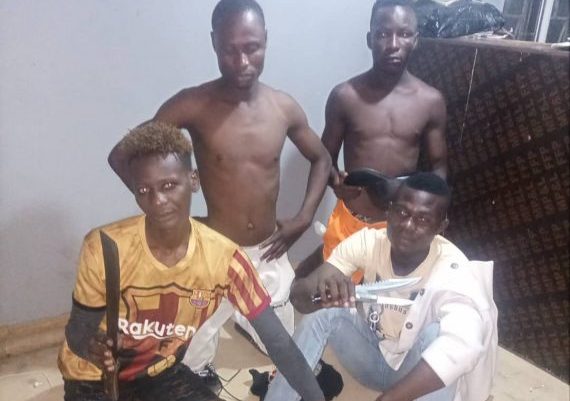 According to a statement by the command’s spokesman, CSP Olumuyiwa Adejobi, the four suspects: Uche Eze, 24; Jamilu Bala, 21; Enest Bala, 24 and Sheidu Sanni, 23 were arrested on Saturday 15th May, 2021, in front of Onireke Division, along the Badagry Expressway, Lagos.

Adejobi said that police operatives attached to the Onireke Division, while on stop-and-search patrol, had stopped a motorcycle conveying four passengers.

The police searched them and recovered two cutlasses, one jack knife, weeds suspected to be Indian hemp, two bottles of iced intoxicant substance (Hehila) and five phones suspected to have been stolen.

The Commissioner of Police, Lagos State, Hakeem Odumosu, has directed that the suspects be transferred to the command’s Special Squad, Ikeja, for proper investigation and possible arrest of other members of the gang.

He further directed that the Divisional Police Officer of the area should go after the hoodlums who are terrorising the area and eradicate traffic robbery and other forms of criminality in his area of responsibility.