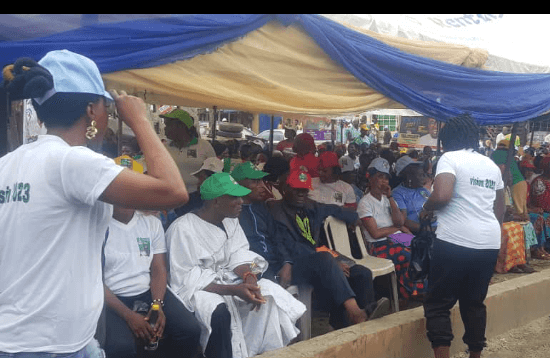 Over 500 members of the Peoples Democratic Party in Ajeromi/Ifelodun Local Government Area of Lagos State on Tuesday reunited with party leaders ahead of the July 24 council poll in the state.

Abogunde said members decided to resolve their differences in order to work together for the party’s candidates to emerge victorious in the forthcoming council election.

The chairman noted that the PDP national leadership had set up a reconciliation committee, headed by the former Senate President, David Mark, to reconcile all aggrieved members.

The chairman said after the committee visited the state, the party leaders and aggrieved members in Lagos State agreed to work together in the interest of the PDP.

He said: “We have gathered today to reconcile our differences so we can win the election because if we don’t come together, it will be difficult to defeat our opponents in the forthcoming election.

“This gathering today also signifies that we are one as you know that the umbrella is big enough to accommodate everyone including the new members and aggrieved ones that have been reconciled with the party.”

Abogunde urged the electorate to stand for their rights and not to be afraid to defend their votes at the polling centres.

He advised party candidates to embark on aggressive house-to-house campaign to tell the electorate that they could do it better in terms of providing good governance to the people of the area.

“We advice the electorate not to be discouraged by the present economic situation and come out en masse to elect their leaders into the local government councils of the state,” he said.

He said PDP was optimistic that it would emerge victorious in the forthcoming local government election in the state.

A party leader, Elder Israel Ogunrinde, said the gathering was to bring aggrieved members together because of the division within the party since its 2017 congress.

Ogunrinde said it was unfortunate that everybody went their separate ways and thanked God that those members had chosen to follow the path of unity in the interest of the party.

The party’s chairmanship candidate, Ajeromi Local Council Development Area, Tajudeen Balogun, said he would bring meaningful grassroots development to the people of the area, if elected.

Balogun said he would improve on the Internally Generated Revenue of the council to fix some bad roads and also focus on improved healthcare system at the local government health centres.

Another party leader, Chief Francis Chima, aka OMOBARCA, advised the electorate to make effective change that would bring good governance to the grassroots.

Chima said good governance was in the hands of the people because once they allowed the wrong people to lead them, it would bring bad governance to the area.