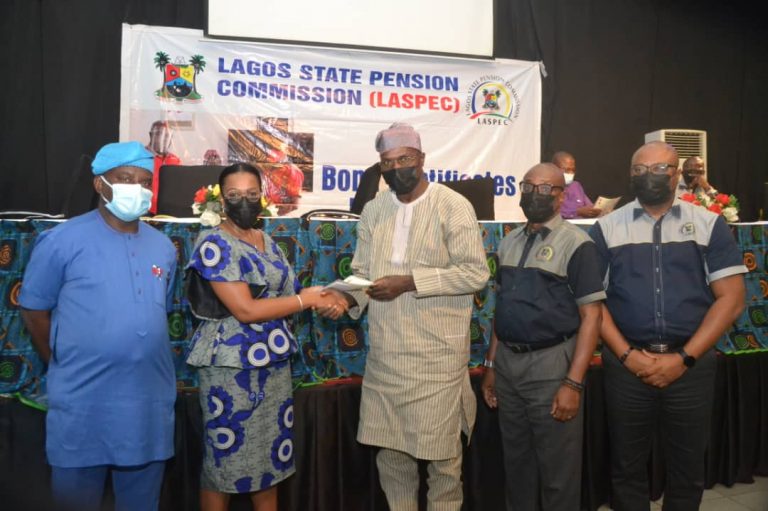 The Lagos State Government says it paid accrued pensions of more than N32 billion to 8,170 retirees between May 2019 and July 2021.

The Lagos State Pension Commission said this in a statement issued on Saturday on the development.

It said Ajibola Ponnle, Commissioner for Establishment, Training and Pensions, made the declaration on Friday.

It said the Commissioner made declaration at the 87th retirement benefit bond certificates presentation to retirees.

Ponnle stated that the state government also paid more than N1 billion into the Retirement Savings Accounts of 247 retirees for the month of July.

She said N1.1 billion had been credited into the RSAs of 247 retirees this month alongside their monthly contributions.

“Lagos State government has paid N32.8 billion to 8,170 retirees in the mainstream; local governments, the State Universal Basic Education Board, the Teaching Service Commission and other parastatal organisations,” she said.

The Commissioner assured that the state government was committed to the welfare and interests of pensioners.

She explained that the government had continually prioritised prompt payment of pension obligations within available resources.

Ponnle said: “In spite of the huge liabilities, the present administration has ensured prompt payment of pension entitlements to retirees under the Pay As You Go Pension Scheme monthly.

“LASPEC ensures payment of accrued pension rights to retirees under the Contributory Pension Scheme (CPS) to enable them to access their RSAs without delay.”

Ponnle advised retirees to embrace the joy and challenges of their new phase of life.

She urged them to contact LASPEC or the ministry should they require clarifications or advice regarding the modalities surrounding their retirement benefit matters.

The Commissioner congratulated the retirees and prayed that God would give them good health to enjoy their benefits.

In his remarks, the Director-General, LASPEC, Babalola Obilana, commended the state government for the efficient and effective administration of the CPS.

Obilana said: “One of the outcomes of effective administration of the CPS is the regular issuance of the retirement benefit bond certificates to retirees.

“I must also appreciate the unflinching support of the ministry, the Pension Funds Administrators  and the insurance companies at ensuring that all our retirees have unrestrained access to their pension benefits.”

Obilana enjoined the retirees to take very good care of their health avoid unnecessary spending and beware of pensions fraudsters.