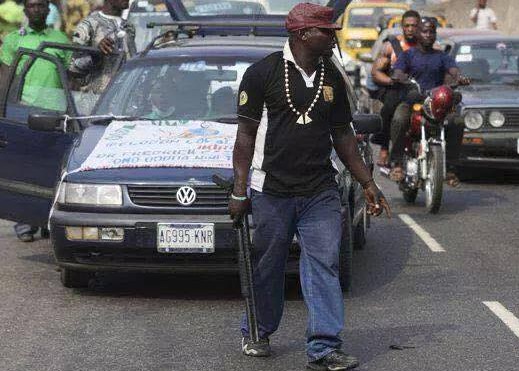 The All Progressives Congress Presidential Campaign Organisation has said it will send a petition against President Goodluck Jonathan to the International Criminal Court at The Hague.
The APCPCO said in a statement on Wednesday, signed by Mallam Garba Shehu, its Director of Media and Publicity, that the petition follows the massive terror unleashed on the residents of Lagos State by armed pro-Jonathan groups under the dubious cover of a faction of the Oodua People’s Congress on the pretext of demanding the sack of Prof. Attahiru Jega, the Chairman of the Independent National Electoral Commission.
The APC Presidential Campaign spokesman noted that the machete-wielding and gun-bearing armed pro-Jonathan groups marched round the major streets of Lagos State, harassing and intimidating motorists, chanting anti-Jega songs in a manner that gave them away as acting the carefully-prepared script for the truncation of the general elections.
Shehu added: “There was such disruption to the tranquillity of the city that warranted the citizens scampering for safety in all directions, a foretaste of the violence they plan to unleash on Election Day.
“Our investigations have confirmed that Monday’s (16th March, 2015) show was a dress-rehearsal for the main disruption planned for the general elections. Lagos, and the entire South West, being a stronghold of the All Progressives Congress (APC), has been marked for massive dishevelling commotion that would involve killings, maiming and kidnapping.
“Our findings have further shown that the recent Nine Billion naira (N9 Billion) Pipeline surveillance contract to OPC and some militant groups in Southern Nigeria was the elixir for the latest crude impudence of the pro-Jonathan armed groups. Indeed, the contract award was indeed a subterfuge for the mobilization of these murderous militant groups for the destruction of lives and property to force the desire of the re-election of Dr. Goodluck Jonathan on the Nigerian people.
“As an opposition APC, we are using this medium to serve Dr. Goodluck Jonathan the notice of our formal protest of this extreme show of impunity to the International Criminal Court. We are aware that Mrs Patience Jonathan is already on the watch list of ICC. The activities of this President and his wife as regards the elections are not patriotic and very unhelpful for entrenching democratic values in the nation.
“We recall the bombing of the APC secretariat and the shootings and disruption of the party’s campaign rally in Okirika in Rivers State, where the First Lady hails from with a muted silence from President Jonathan.
“Whereas the Police authorities had denied the opposition party its legitimate and democratic rights to organise one million person march for General Buhari in Kano it was, however, quick to approve that in Lagos, providing security to the pro-Jonathan armed groups while they unleashed mayhem on citizens in Lagos on Monday, a day that inhabitants of the city consider the most important of the week.
“We are not ready to cower to the intimidation of Dr. Goodluck Jonathan, ahead of the general elections. We believe Nigerians shall speak eloquently on 28th March, 2015 and this brutality on the psyche of the Nigerian people shall cease.”