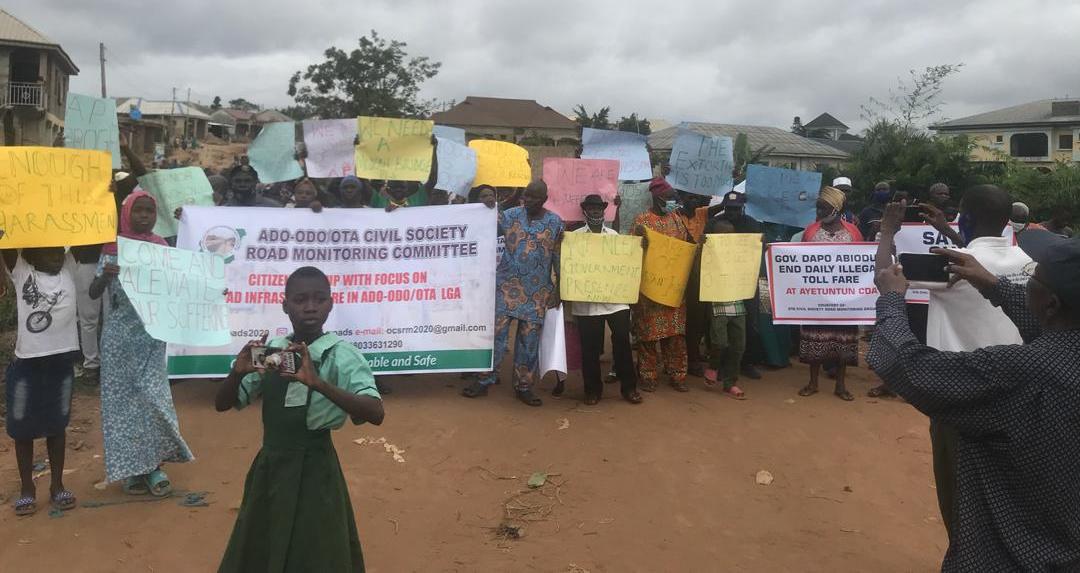 Some residents of Ayetuntun, a border community between Ogun and Lagos states, on Monday, protested alleged extortion and harassment on a link-bridge in the area.

The News Agency of Nigeria reports that Ayetuntun is between Agbado/Oke-Odo Local Council Development Area Lagos State and Ado-Odo, Ota in Ogun.

NAN also gathered that the bridge was constructed by a private company, Liner Edge Investment, with the approval of the Agbado/Oke-Odo LCDA.

The Chairman of Ayetuntun Central Development Committee, an umbrella body for the six Community Development Associations in the area, Mr Bashiru Olawale, said the protest had become necessary to bring the attention of both Lagos and Ogun governments to the plight of the people.

Olawale said government should rescue the community from the alleged extortion by the private company that constructed the bridge.

He alleged that those who erected the wooden bridge were just extorting residents of the community.

“This is why we are calling on the government to come to our rescue.

“We want the government to evacuate the bridge and give us a befitting concrete one,’’ he said.

Olawale said that the community was not carried along in the construction of the bridge.

According to him, the private firm has been collecting tolls of N200 toll from cars and N20 from pedestrians for using the bridge over the last five years.

He said that pedestrians pay N20 for as many trips they make on the bridge.

Also speaking, Mr John Abolarin, the Chairman of one of the Community Development Associations in the area, re-echo the need for the government to put an end to the extortion and harassment of residents.

Abolarin said the protest was long overdue because the suffering experienced by residents was too much.

Meanwhile, a spokesman for the company, Mr Abiodun Raji, said that allegations levelled against ‘Liner Edge Investment’, were untrue.

Raji told the News Agency of Nigeria that the community was aware of the contract to erect the bridge.

The News Agency of Nigeria reports that the bridge, popularly called ‘Tente Bridge’ was constructed by the company about five years ago.