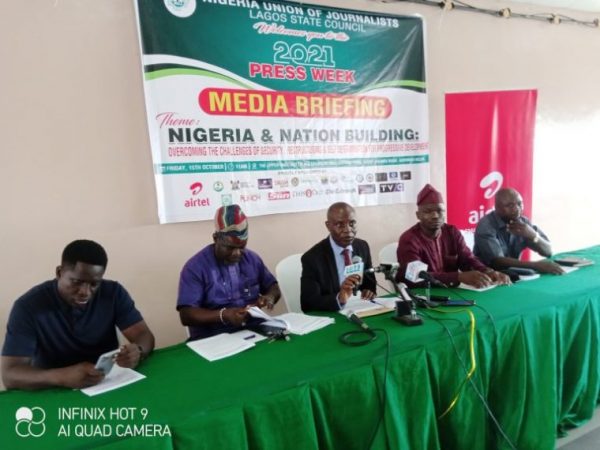 The Nigeria Union of Journalists, Lagos State Council says the welfare of its members and veterans remains paramount.

Its Chairman, Adeleye Ajayi, said this at a news conference on activities to mark the 2021 NUJ Press Week on Friday.

According to him, the press week is a time for journalists to brainstorm on crucial issues of national interest and exercise their bodies through sporting activities.

Ajayi said: “Our welfare for elders is superb. We love them and we are enjoying very smooth and cordial relationship with all elders in the Lagos council. We have taken the issues of welfare of our members as a priority.

“We are also keeping them abreast of all we are doing and they are happy with us. We have received their blessings. They are always on our list. We need them around to advise us and to guide us aright.”

Ajayi said October 18  had been set aside for a health walk from Ikeja Local Government to the LTV premises in Agidingbi, Ikeja.

He said on October 19, there would be novelty matches between the Nigeria Association of Women Journalists and their counterparts from the Nigerian Institute of Public Relations in Lagos State; and the NUJ and Nigeria Institute of Journalism would also trade tackles on the same day at the NIJ in Ogba.

Ajayi said a public lecture would hold on October 20 at the Combo Hall of the LTV Complex, Agidingbi.

He said the lecture would be delivered bySegun Adeniyi, Chairman, Editorial Board, This Day Newspapers.

The occasion would be chaired by Prof. Ralph Akinfeleye.

According to him, the panel of discussants include Prof. Adepoju Tejumaye, Head of Department, Mass Communications, University of Lagos, and Dr. Jide Johnson of the NIJ.

CP Hakeem Odumosu, Lagos State Commissioner of Police, and Pastor Ituah Ighodalo of the Trinity House Church among others are also listed to attend.

Ajayi said that there would be Chapels’ Rendezvous on October 21, a Jumaat Service at Lagos State Secretariat Mosque and a Gala /Award Night at the Lagos Airport Hotel, Ikeja on October 22.

Allen Onyema, Chief Executive Officer, Air Peace, would also be recognised among many others.

He called for donations of clean and decent clothing, shoes, food, books and other items for children and adults.

The council chairman said the high point of the event would be on October 24 with a Thanksgiving Service at the Chapel of Christ The Light, Alausa, Ikeja.

Ajayi said though he resumed office on November 26, 2020, amidst a turbulent election, his administration had recorded some modest achievements, especially on welfare and training of members.

He added: “Efforts are being made and we will not rest on our oars to ensure we take possession of our estate at Abarenland.

“Concerning our Secretariat, Ladi Lawal Press Centre, being remodelled, we are at the final stage of reconciliation of value of work done so far by the former contractor, having engaged a Quantity Surveyor who has just submitted the final evaluation report.

“We are deeply concerned with the health of our members, hence we emphasise that those not on National Health Insurance Scheme should patronise the health insurance scheme put in place by the Lagos State Government.

“The life insurance scheme is to be subsidised at 50 per cent rate by the union.”

Also speaking, Adewale Akodu, the Chairman of Press Week Organising Committee, called for cooperation of all members, noting that the week was meant to bring Lagos journalists together.