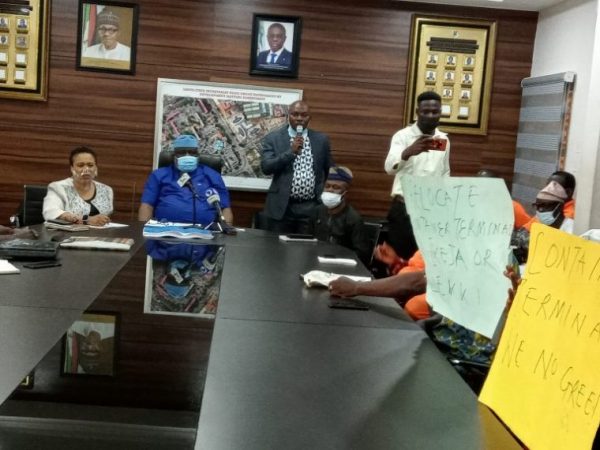 The Lagos State Government says it will continue to seal up tank farms and petrol stations contravening its physical planning permit laws, being reopened by the Department of Petroleum Resources.

The Commissioner for Physical Planning and Urban Development, Dr Idris Salako, said this at a news briefing on Tuesday in reaction to the reopening of some tank farms it had sealed up by officials of Department of Petroleum Resources (DPR).

The commissioner accused the DPR of usurping the powers of the state government to regulate development and town planning in the state.

Salako said dozens of contravening petrol depots, filling and gas stations the state government sealed up were wrongly unsealed by the DPR in various parts of the state.

He said that several of the facilities were wrongly sited without building planning permits, with some of them using fake approvals to carry out various illegal activities that compromised safety.

According to him, the activities of petrol tankers have destroyed livelihoods in Ijegun Egba, Satellite Town and other communities, in addition to truck accidents claiming innocent lives daily, due to recklessness of the petroleum marketers.

Salako noted that tank farms and other operators failed to adhere to safety standards, and were as well not giving back their host communities as agreed about 18 months ago.

He said the DPR had failed to obey a subsisting Supreme Court judgment granting the state powers to regulate development permits, protect the environment and residents.

Salako said that 18 months back, the DPR requested for three months to comply with agreements from a stakeholders’ meeting, but were yet to do so, thereby compounding environmental degradation and jeopardising residents’ safety.

He said the state government was not competing to regulate the downstream sector and had done its part to provide infrastructure to support the agreement for tank farms already in operation to coexist with the host communities.

According to him, every time the ministry or its agencies seals erring petroleum filling stations, tank farms or gas stations, the DPR usually goes out of its jurisdiction to unseal the facilities.

“We will not surrender the mandate of this ministry to any Federal agency,” he said.

Salako highlighted the functions of the ministry and its agencies, adding that it had both supervisory and technical roles in executing its mandate.

He said the ministry was ready to dialogue with all the stakeholders toward ensuring progress, harmony and synergy.

While fielding questions from journalists, he re-emphasised that the state government would always go back to re-seal any of the facilities reopened by the DPR.

“We will continue to re-seal anyone reopened by the DPR,” he said.

He enumerated the benefits of the ongoing Ibeju-Lekki Master Plan, adding that it could cater for the petroleum marketers.

The commissioner urged the operators to seize the opportunity of relocating to the area.

Reacting to the allegations, DPR Lagos Zonal Controller, Ayorinde Cardoso, told NAN that the agency did not act outside its jurisdiction, citing various laws on the Exclusive List.

Cardoso insisted that the DPR was operating in line with the Petroleum Act of 1969, which predates any new law not binding on the agency.

According to him, the DPR usually collaborates with the relevant agencies, and did same with the Lagos State Government’s agencies for requisite permits and approvals before the issuing licences.

He said the DPR was ready for synergy, but advised agencies of the state government to work together to stop duplicating roles of sealing tank farms and petrol depots frequently to achieve their revenue collection drives.

“Let them re-seal, we will keep on unsealing,” he warned.

He declined comments on allegations by residents of new container terminals being cited in Satellite Town, saying it was out of his jurisdiction.

The News Agency of Nigeria reports that members of Satellite Town Forum (STF) also protested at the briefing over the activities of tank farms in their area.

Carrying placards with various inscriptions, the residents said that the building of a fire station by the state government could avert disaster in the area.

Spokesman for the forum, Governor Imitini, accused the DPR of being behind their suffering by bringing tank farms to the area delineated as residential area in the 70s.

Imitini said that apart from the tank farms, the Nigerian Navy has an armoury in the area and any accident would be disastrous.

“We are ready to go into war with the DPR also,” he said.