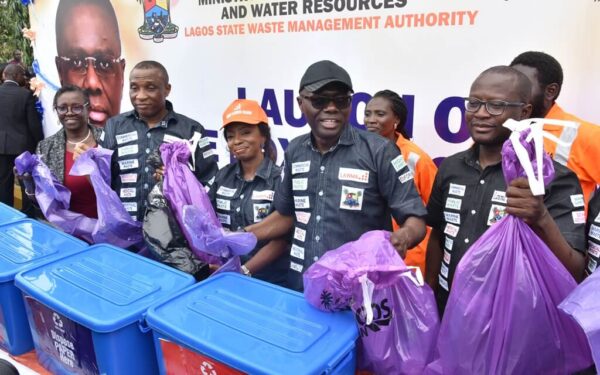 The Lagos State Government has introduced a new culture of waste disposal and management with the launch of Blue Box Initiative on Thursday by Governor Babajide Sanwo-Olu.
The initiative, launched at Simpson Transfer Loading Station on Lagos Island, is a component of the health and environmental regeneration agenda of the Sanwo-Olu administration conceived to achieve the Governor’s vision of cleaner and greener Lagos.
The Governor, who described the programme as a fulfillment of his campaign promise, said Lagos could no longer depend on unprofitable waste management system.
He said his administration was determined to create wealth out of the 10,000 metric tons of waste daily generated in the state through recycling technique that would also create direct and indirect jobs in the value chains.
He said: “It is now crystal clear that we cannot depend on old disposal method to manage the quantum of waste generated in Lagos. The experience of the past dictated the need to explore efficient techniques in line with our ‘Smart City’ aspiration. Rather than being a burden on us, we want to create wealth through the new techniques and generate jobs for our youths.
“In Lagos, 50 per cent of waste generated contains reusable resources which we can be harnessed and channeled into the economy of the State from the dustbin. This circular economy we are aiming to achieve through the introduction of Blue Box Programme encourages the use of another person’s trash as fixture for another person’s process. It minimises waste in our society and generates income for the citizens.”
Sanwo-Olu observed that the bulk of recyclable materials currently being harvested on the dumpsites by scavengers could not pass quality test required for the recycling process due to high level of contamination.
This, he said, made it difficult for recyclers to get value out of the materials.
The Governor said the Blue Box Initiative was introduced to address the observed challenges as well as creating business opportunities for the youth in this sub-sector.
By 2021, Sanwo-Olu said the State would have captured over 50 per cent of recyclable waste materials from its dumpsites and reduced carbon footprints in the environment.
He charged the Lagos State Waste Management Authority to actively engage communities across the state by sensitising people on how to harness recyclable materials for wealth creation.
The new initiative, the Governor said, would open new market and business opportunities for both the government and the people.
The Commissioner for the Environment and Water Resources, Tunji Bello, said the initiative was the government’s strategy to redeem the aesthetics of the environment after a period of degeneration that preceded Sanwo-Olu’s administration.
Bello said: “The pursuit of delivering cleaner Lagos to our citizens necessitated our resolve to rethink our strategy in waste management, one of which is sorting of waste. Our ultimate goal is to attain waste conversion and buyback, which, in the process, would turn waste to resources. This will ultimately minimise waste and discourage inappropriate disposal in the drainage.
“Today’s launch of Lagos Blue Box Programme, which is to modernise our waste management system, is a move in the right direction. This is a component of our waste management policy aimed at attaining cleaner and greater Lagos.”
Giving technical brief on the Blue Box Initiative, Managing Director, LAWMA, Dr. Muyiwa Gbadegesin, said the agency introduced the move to phase out a “more cumbersome and expensive” waste management process, adding that this has denied the State derivable revenue that could accrue from efficient waste management system.
Gbadegesin said: “The Blue Box Initiative is a single stream recyclable collection programme that will allow separation of recyclable materials from the general waste at the point of generation. Residents are to keep waste in black and blue containers at home. The blue container is for recyclables.
“To kickoff the Blue Box programme, we are distributing these colour-coded recycling bags to each household through franchised recyclers for separation of recyclables. The bags will be collected on designated dates by assigned recyclers and transported to the sorting hubs within the area at designated days of the week. Respective recycling companies who are franchise holders will then come to pick up the boxes.”
Gbadegesin said recyclers and environmental volunteer corps, who would further educate residents on the usage, would distribute the colour-coded bags.
He added that the volunteer corps would also collate and sort the collected recyclables before being transported to Recycling Centres in respective communities for further sorting and sale to off-takers.
Meanwhile, LAWMA has started distribution of free waste sorting bags to residents to drive the new initiative.