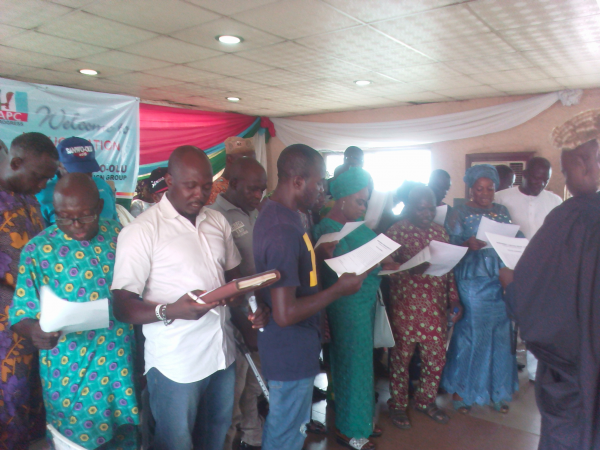 The All Progressives Congress in Lagos State on Sunday inaugurated the Independent Campaign Group for Babajide Sanwo-Olu, the party’s governorship candidate in 2019 elections in Yaba.
The News Agency of Nigeria reports that the event witnessed inauguration of ward and polling units coordinators of the group in Yaba Local Council Development Area.
The coordinators took Oath of Allegiance administered on them by Yemi Ajala, a legal practitioner.
Speaking during the event, Adetayo Oyemade, the party leader for Lagos Mainland Local Government Area, and the LCDA, said that the group would embark on house-to-house campaign to sell the APC candidate to all residents.
According to him, no stone will be left unturned in mobilising voters for Sanwo-olu’s victory at the March 2, 2019 governorship election.
He said: “We should all unite ourselves to ensure victory. We are working for the governor, if we fail to ensure his victory, we won’t get any dividends of democracy no matter how little.
“We must deliver a higher number of votes for APC candidates than we did in 2015.
“We must do more and we are going to engage more street mobilisers to double our votes.”
He commended the women for trooping out in large numbers for the support of Sanwo-Olu as the next governor of the state.
The Chairman of the occasion, Chief Babatunde William, urged the people to canvass for more votes for the APC candidates in all elections, saying only APC could guarantee dividends of democracy.
William, a Special Adviser to Governor Akinwunmi Ambode on Labour, said that if Sanwo-Olu emerged winner at the poll, the state would move to the next level of prosperity and development.
He said: “My message to all is that we should all work together and mobilise massively for Sanwo-Olu in Yaba LCDA.”
In his remarks, Tayo Oyemade (Jnr), the Coordinator, Babajide Olusola Sanwo-Olu Campaign Organisation, urged the party members to stop thinking that PDP is dead in the council.
Oyemade called on the party faithful to rather work harder to diminish the impact of PDP in the forthcoming elections, saying that this is what  informed the inauguration of the new mobilisers.
He said: “We are working on different strategies to deliver a landslide victory for Babajide Sanwo-olu. We are going to win these elections. This event is to get Sanwo-Olu elected.”
According to him, the group has concluded plans to mobilise all its foot soldiers across wards and polling units with all they need to succeed in their mandates.
Dayo Israel, the Deputy Coordinator, Youths and Students Mobilisation, BOSCO, said that the youths would mobilise support for Sanwo-olu to ensure that APC’s winning margin soared to over 1 million votes.
Israel said that Sanwo-Olu had robust programmes for development projects, security, economy, healthcare and youth development, among others, which would implement, if elected.
According to him, the APC gubernatorial candidate has promised 15 per cent youth affirmative actions in his cabinet formation, urging the youths to support him.
Adebayo Adesiyan, Chairman, Lagos Mainland Disable Persons Association, said that physically challenged people would mobilise themselves to ensure Sanwo-olu’s victory at the poll.
At the events were various markets and artisans’ associations, religious leaders, traditional leaders, Community Development Committees and scores of other APC members.