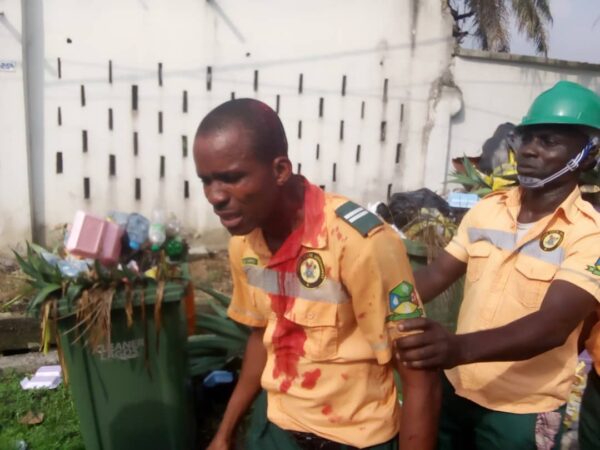 Over six operatives of the Lagos State Environmental Sanitation Corps were badly injured on Friday while carrying out enforcement on street trading along Queens Drive in Ikoyi.
Three operational vehicles of the corps were also damaged.
The operation, which was part of Governor Babajide Sanwo-Olu’s mandate to clear every part of the State of all environmental nuisances and infractions such as street trading on walk-ways/setbacks as well as erection of illegal shanties across the State, was led by the Deputy Corps Marshal Operation, Ganiu Kazeem, and Deputy Corps Marshal Discipline and Staff Welfare, Adeleke Adeeso, on the instruction of the Commissioner of the Environment and Water Resources, Tunji Bello.
The staff of the Federal High Court, who were alleged to patronise the street traders, reportedly obstructed the operatives while dislodging the street traders who had earlier been given several notices to vacate the drainage part used for hawking of food items and drinks.
The Deputy Corps Marshal explained that on getting to the scene of the incident at about 1:45pm, the staff of the Federal High Court with the private security personnel of the Court, came out en mass to attack the team with stones, iron rod, broken bottles and cutlasses, leaving them injured and damaging two operational vehicles.
He further explained that the operation had nothing to do with the staff of the Court, but for the fact that the hawkers who occupied the drainage channels were allegedly paying rent to the private security of the Court, the private securities in conjunction with some staff of the Court decided to stop the peaceful operation.
The Agency’s officers who were injured included Oyedokun Samson (driver), Iwatan Oluwaseun, Riwatan Oluwatobi and Shipeolu Babatunde were immediately rushed to the hospital and currently receiving treatment, with one of them stabbed on the neck in serious condition.
The Deputy Corp Marshal confirmed that some of suspects were arrested during the fracas, while the case was also immediately reported at the Ikoyi Police Station for further investigation.
He advised Lagosians to comply with the law of the Lagos State Government on Zero Tolerance to street trading, as the government would no longer tolerate the slightest attack on any enforcement personnel forthwith.”
Consequently, the Corps Marshal of the Agency, retired Commissioner of Police Gbemisola Akinpelu, reiterated the determination of the agency to ensure that all the citizens in the state abide by the stipulated environmental regulations of the State, noting that nobody in the State is above the law and warning people to desist from attacking enforcement officers out to carry their legal duties.