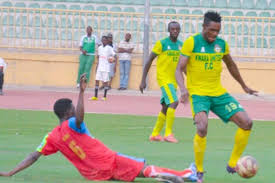 The Chairman, Kwara United FC of Ilorin, Prince Oladimeji Thompson, says the three-match ultimatum to the club’s technical crew is to charge them to brace up or get axed.
Thompson told newsmen on Tuesday in Ilorin that the technical crew should address the club’s poor outings in the ongoing Nigeria Professional Football League.
The Kwara United boss said he was under pressure to sack the team’s Technical Adviser, John Obuh, when the results were bad but he stood by him.
Obuh said: “When people are talking negatively about the team when the results are not good, you will always have a second thought but people won’t see things from your own angle.
“The pressure you get when things are going wrong does not allow one to be focused.
“As far as I am concerned, he (Obuh) is not a failure. The problems with the players over salaries had been resolved.’’
According to him, if urgent action is not taken to address the lackluster performance of the team, it may tarnish the good image of the club and the people of the state.
Thompson assured the club’s fans that the technical crew and the players would be given the necessary support but that they should improve on their performance.
The News Agency of Nigeria reports that Kwara United lost its Match Day 10 encounter 0-1 to Rivers United on Sunday in Ilorin.
The loss was the Harmony Boys’ second home defeat in the 2017/2018 NPFL.
They will travel to Abia to lock horns with Abia Warriors for their Match Day 11 on Sunday in Umuahia.
Thompson said that the management was not insensitive to the players’ welfare, adding that negotiations with the players over salaries had been resolved.
He said: “The system in government is different from the private sector, while we are trying to tidy up our running cost with the government, the players are impatient.
“I wasn’t happy when I heard of the players’ complaint over payment of salaries.
“They should have given us the opportunity to explain what we are doing behind the scene before they complain.
“Thank God we have resolved the issues and we are now all happy.’’
He commended Governor Abdulfatah Ahmed of Kwara for approving the prompt payment of the players’ salaries.
He solicited for the support of the stakeholders, especially the fans for the team to succeed.
He appealed to the fans to bear with the management over the increment in gate takings because the reality was that the club must generate funds for its operations.