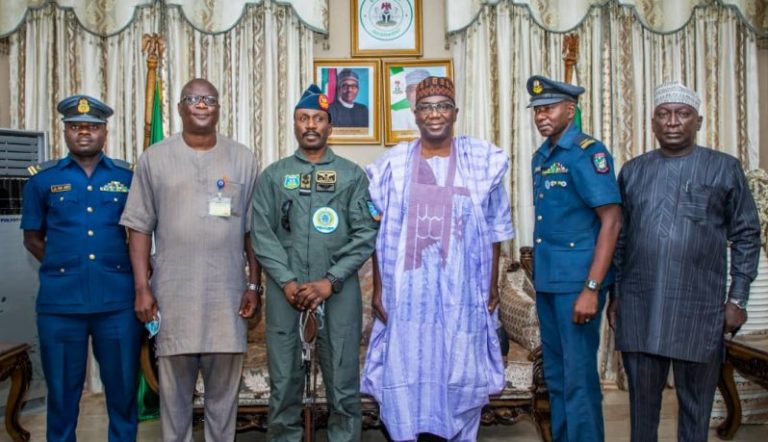 Kwara State Governor AbdulRahman AbdulRazaq has said the administration will make a strong push for the establishment of the Air Force Comprehensive Secondary School to complement the existing basic classes in the state.

He also said the government is seeking the extension of the current Air Force architecture, such as its training infrastructure, in the state so that more of its aircrafts and activities will take place in the state.

The Governor spoke on Tuesday when he received the new Commander of 303 Medium Airlift Group of Nigerian Air Force Air Commodore Garba Ibrahim Jibia and his team in Government House Ilorin.

Efforts are also being made to strengthen the International Aviation College Ilorin through renewal of the technical partnership between the state and the Air Force authority, the Governor added, saying the school requires training aircrafts and other technical support from the military arm.

The Aviation College now has at least 60 students, up from the paltry five that the administration inherited in the school, according to the Governor, who added that different steps are being taken to reposition the school.

The Governor appreciated the Air Force for its significant contributions to national security, especially its roles in maintaining peace and order in Kwara alongside other security agencies.

He also lauded the federal government for considering the state with the new Air Force commander, who he described as highly experienced.

Air Commodore Garba Ibrahim Jibia, the Commander 303 MAG of Nigerian Air force, for his part, said the visit was to reassure the Governor of their readiness to support the administration’s vision of maintaining peace that Kwara is known for.

“The purpose of our visit is basically to extend our hands of loyalty to the people and government of Kwara State, and to also reassure Your Excellency of our willingness, ability and readiness to support your vision of maintaining the enviable peace that symbolizes Kwara State. I’m happy to observe that Kwara is indeed one of the most peaceful states, if not the most peaceful, in the country,” he said.

Jibia said there are many ongoing efforts to strengthen security in the state at the level of the Air Force, including some reconnaissance and surveillance operations to check some nonstate actors who may want to hibernate in the state.

He also urged AbdulRazaq to help pursue their request for the creation of a secondary school wing for the Force in Kwara, even as he solicited for another Operation Harmony van to ease the activities of the security outfit in the state.