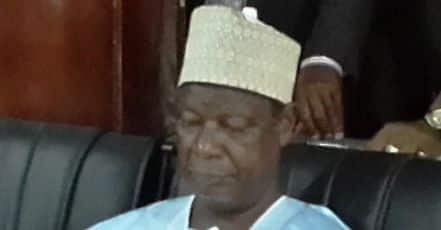 Share
Facebook Twitter LinkedIn Pinterest Email
The Kwara State Government has called on Royal Fathers to encourage their subjects to positively embrace government activities and contribute their quota towards the development of the State and the Nation in general.
The state’s Deputy Governor, Elder Peter Kisira, made the call on Monday in Omu-Aran, Kwara State, while presenting third class staff of office to the traditional rulers of Oko, Ilala and Igonla in Irepodun Local Government Area of the State.
Kisira reiterated the State Government’s abiding faith in the traditional institution and the personage of the institution as veritable vehicle for progress.
The Deputy Governor commended the traditional rulers for their support to the present administration and their collective roles in mobilizing their subjects to participate in government programmes and activities.
He expressed gratitude to God and thanked Governor Abdulfatah Ahmed for the elevation, calling on the Royal Fathers to rule with the fear of God in dealing with all and sundry in order to give room for accelerated development in their communities.
Also speaking, the State Commissioner for Local Government, Chieftaincy Affairs and Community Development, Alhaji Saidu Habeeb, called on the traditional rulers to continue to carry their people along in the discharge of their responsibilities.
The Chairman of Irepodun Local Government Traditional Council andOlupo of Ajasse Ipo, Oba Sikiru Atanda Sanni, thanked the State Government for the gesture, pledging that the Royal Fathers would continue to play their fatherly role to ensure peace and development in the state.
Earlier, the Chairman of Irepodun Local Government Area, Muyiwa Oladipo, pledged their loyalty and support to the government of Governor Ahmed and the Leader, Dr. Abubakar Bukola Saraki.
Post Views: 0
Kwara Kwara State Omu-Aran Peter Kisira
Share. Facebook Twitter Pinterest LinkedIn Tumblr Email

Why social media must be restricted — Bishop Oyedepo