Konta dumped out of Wimbledon 2019 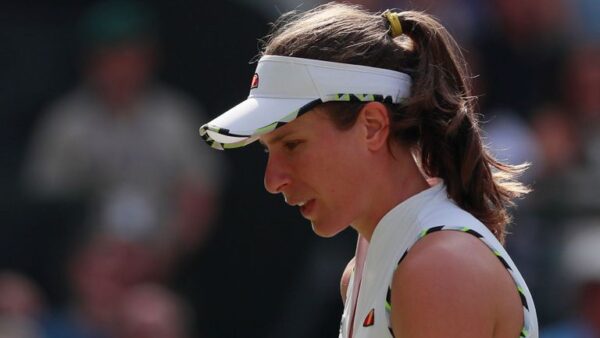 Johanna Konta is out of Wimbledon after a straight-sets defeat to Barbora Strycova.
The British No.1 had reached the quarter-finals at SW19 but was beaten 7-6, 6-1 by Strycova and she was heard swearing loudly during a mistake-laden performance.
Konta lost the first set for the third successive match but this time could not fight back.
She had led 4-1 against her unseeded Czech opponent but Konta was the architect of her own downfall as a host of errors helped Strycova recover.
Strycova eventually won the tie-break 7-5 and she was in control when Konta dropped serve in the second game.
The British No.1 was heard screaming “oh f****** hell” after her mistakes.
It was particularly disappointing coming after Konta’s performances in the last two rounds, where she had recovered from a set down to defeat top-10 duo Sloane Stephens and Petra Kvitova.
Strycova more than played her part, using her full repertoire of shots and court craft to prevent Konta from getting into a rhythm.
The 33-year-old, who is ranked 54, said earlier this week it may be her final Wimbledon, and for her to move through to a first grand slam singles semi-final and take on Serena Williams is a tremendous achievement.
Konta had been hoping to match the achievement of England’s Lionesses, many of whom were watching from the Royal Box, by reaching the semi-finals.
Konta had made the last four in 2017 and will have been hoping to repeat the trick this year but it wasn’t to be.
Strycova will now take on Williams in the last four while Simona Halep faces Elina Svitolina in the other last four match.