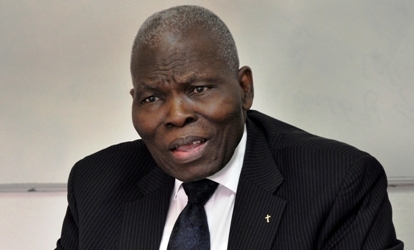 A coalition of inter-ethnic group under the aegis of The Yiiegba Charter, led by elder statesmen from the Southern part of the country, on Tuesday in Lagos met to lend their voices for a peaceful and united Nigeria.
The Chairman of the group, Prof. Anya O. Anya, while addressing newsmen shortly after the group concluded its meeting, said the need to stick together as one indivisible people was the way to go.
Anya said that this was coming following rising tension that had recently engulfed the country over agitations by some Igbo groups calling for a Biafran state and the ultimatum given to Igbo community by some northern groups to leave the zone.
Anya said that instead of a call for separation by some Igbo youths and the exit threat to Igbos issued by some Arewa youths, what was needed for the country was to establish a new Nigeria that would foster peace, justice, unity and equal opportunity for all.
He said that peaceful co-existence among the various groups in the country should be maintained, while justice and fairness to all the ethnic communities must be upheld.
He said to this end, the group agreed that the need for restructuring was the best option.
Anya said: “What is being done here today is to explore what is needed to establish a new Nigeria.
“We all want peace, justice and equal opportunities for all Nigerians, that none should feel cheated, a country that puts the people first above individual’s interests.
“God has deposited all resources in this country, but because of our personal sentiments and ethnic affiliations, we have not been fair in the equal distributions of our collective wealth.
“That is why restructuring of the country is the way to go.”
Also speaking the Co-Chairman, Dr. Christopher Kolade, said the elders had painstakingly come together to address the lingering crisis of resource control through unanimous resolution for restructuring and to bequeath to the youths the legacy of a better new Nigeria.
Kolade said: “The national conditions of our state is challenging.
“The peace of this country is being threatened and the onus falls on us, the elders, to address these problems once and for all to have a better future for our youths and younger generation.
“With this caliber of elders you see here, our focus is to help others to use the think tank to think along with us, where everyone must work together to build a new Nigeria, borrowing experiences from the past to build the future.”
Kolade commended former Vice President Atiku Abubakar; former Heads of State, Generals Ibrahim Babangida and Yakubu Gowon, amongst other northern leaders, for their support for restructuring of the country.
Other participants at the forum included Chief Ayo Adebanjo, Chief Chukwuemeka Ezeife, General Ike Nwachukwu (rtd).