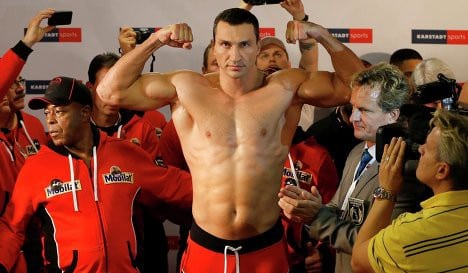 Share
Facebook Twitter LinkedIn Pinterest Email
Former heavyweight champion, Wladimir Klitschko, has dismissed speculation that he could make a comeback to the ring and rematch Anthony Joshua as “an early April Fools’ joke.”
Klitschko, 42, retired from boxing after he was knocked out by WBA-WBO-IBF champion Joshua at Wembley Stadium in 2017.
The Ukrainian was also defeated by Joshua’s countryman Tyson Fury in his previous fight in 2015.
Joshua Britain’s No. 1 pound-for-pound fighter in 2018
Unified heavyweight world titlist Anthony Joshua may have taken some flak in 2018 for the fights he did not have, but he remains ESPN’s British No. 1 pound-for-pound fighter for the year.
With uncertainty surrounding the heavyweight division and the immediate futures of Joshua, Fury and Deontay Wilder, Klitschko said he had been sent messages by fans urging him to return.
Fury and Wilder are expected to rematch at a US venue in the first half of 2019, leaving Joshua in need of an opponent to fill his April 13 fight at Wembley.
But despite suggesting that he feels he would still be able to compete at the highest level, Klitschko quickly rejected any talk that he could come out of retirement any time soon.
“I’m all about challenges in life and I do really feel that I [have] still got it,” Klitschko posted on Twitter.
“Recently many of you contacted me willing to see me making a comeback to the ring this April and I’m thankful to y’all for that.
“However, I need to call such speculation an early April fool’s day joke.”
Anthony Joshua April Fools Wladimir Klitschko
Share. Facebook Twitter Pinterest LinkedIn Tumblr Email