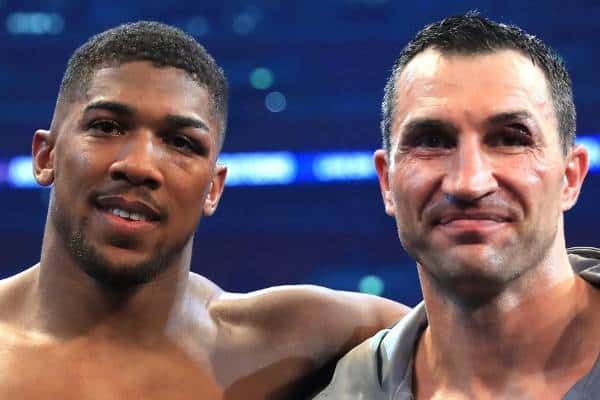 Share
Facebook Twitter LinkedIn Pinterest Email
The saga over Wladimir Klitschko‘s potential return to boxing has been stoked once again after the Ukrainian’s former promoter suggested the 43-year-old may not be content with what he achieved in the sport.
Klitschko has continually teased a return since being stopped in the 11th round against Anthony Joshua in April 2017 and was understood to be in negotiations with Dillian Whyte at the beginning of the year.
However, the former IBF, WBA & WBO champion, who domineered the heavyweight division for over decade, ultimately decided that if he were to come out of retirement he would need to have a warm-up bout before returning to world title level.
Streaming service DAZN are believed to have been offered Klitschko a lucrative three-fight deal, reportedly worth up to £60 million, in an attempt to lure him back to the ring.
However, Tom Loeffler, who represents Klitschko’s K2 Promotions, believes Deontay Wilder could be a more viable opponent.
“Wladimir had such a good championship run that a lot of people want to see him back in the ring,” Loeffler told Sirius XM. “I don’t know whether he’s content with what he’s accomplished.
“It will be his decision. He’s been posting videos and photos showing the bug is still somewhere in the back of his head.
“My personal opinion is I’d like to see him and Deontay Wilder. That would be a tremendous fight.”
Wilder, who has reconfirmed his loyalty to US broadcaster Showtime, will defend his WBC world title against Dominic Breazeale in June, and could well be available for a fight at the back end of 2019 after negotiations with Joshua and Tyson Fury‘s respective teams reached a standstill.
Deontay Wilder Dillian Whyte Tom Loeffler Wladimir Klitschko
Share. Facebook Twitter Pinterest LinkedIn Tumblr Email