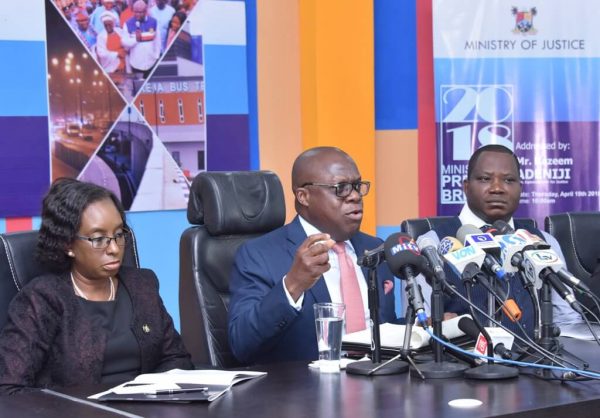 Share
Facebook Twitter LinkedIn Pinterest Email
The Lagos State Government on Wednesday assured that no effort would be spared in ensuring the logical conclusion of the cases filed in court against kidnap kingpin, Chukwudumeme Onwuamadike, popularly known as Evans.
Evans, who was arrested in his mansion in Magodo area of Lagos last year, is being prosecuted by the State Government in court alongside others for masterminding and executing series of high profile kidnappings and murder in the State.
The State’s Attorney General and Commissioner for Justice, Adeniji Kazeem, who said this at the ongoing Ministerial Press Briefing held at the Bagauda Kaltho Press Centre in Alausa as part of activities marking the third year anniversary of Governor Akinwunmi Ambode’s administration, said the State Government was committed to ensuring the logical conclusion of all pending cases in court and serve justice to the people.
Kazeem said: “On the Evans’ matter, the cases filed against him are ongoing in court. The issue is that the lawyer representing him is trying to play some games to delay the matter but in all his games, we have been defeating him in court.
“We have filed different cases. Some are for kidnapping and some bordered on murder and his lawyer is fighting all the cases but what I can assure the people is that we are committed to ensure the matter is concluded and defeat him at the end of the day.”
While reeling out activities of the agencies under the Ministry in the last one year, the Attorney General said the State Government received and treated a total number of 11,451 cases through the Special Task Force Against Land Grabbers, Domestic and Sexual Violence Response Team and the Special Offences (Mobile) Court in the last one year.
He said the government also received 316 inquiries through the recently unveiled first state-owned DNA and Forensic Centre with 71 active cases currently ongoing bordering on homicide, rape, toxicology, child trafficking, serology, among others.
According to Kazeem, the Anti-Land Grabbers Task Force designed by the present administration to fight the menace of forceful take-over of properties received 1,300 petitions, out of which 855 were concluded and 530 currently at various stages of resolution.
“In the period under review, over 35 arrests of suspected notorious land grabbers were effected while 26 criminal prosecution cases against suspected land grabbers are presently ongoing,” the Attorney General said.
Besides, Kazeem said in a bid to enhance due diligence in property transaction, the State Government introduced the Real Estate Electronic Litigation Database designed for the provision of access to information primarily on properties which are subject of litigation, adding that since its launch, the portal has recorded over one million hits and over 10,000 consistent users from Nigeria, United States, United Kingdom, South Africa and others.
He recalled that since its inception, the DSVRT had galvanized strategic action and responded appropriately to formal and informal reporting of incidents of rape, defilement, domestic violence, child abuse, neglect and maltreatment in the State through the active support of the Governor and other partners.
He said: “The Ministry has noted an increase in report of domestic abuse against men. To date, the DSVRT has received a total number of 131 cases in this regard. Overall, a total number of 1771 cases were reported during the period under review. The team also provided free medical services and psycho-social therapy for over 700 survivors of domestic/sexual violence, conducted capacity building trainings with 220 police officers across the State, and successfully secured the conviction of seven perpetrators.”
Kazeem added through the Citizens’ Mediation Centre, the State Government received a total number of 47,292 new cases free of charge, out of which 25,191 were resolved with others at various stages of resolution.
“The total value of settlement of debt related matters achieved by the Centre during the period under review from May 2017 to April 2018 as settlement between parties was N1,352,745,391,” the Attorney General said, among other achievements by the State Government in the justice sector.
Speaking on Hotel and Restaurant Consumption (Fiscalization) Regulations 2018, Kazeem clarified that it was neither a new law nor an additional tax, but a regulation aimed at ensuring that government gets due revenue.
He said: “It is a regulation and not a new law. It was made pursuant to an existing law that was already in operation. What this regulation essentially seeks to do is to allow the government to put certain equipment in the restaurant and hospitality organizations to properly monitor the revenue that is coming so we can know what exactly is due to the State Government.
“It is not an additional tax; it is just to enhance transparency in collection of taxes that are due to the State. So, I want to clarify that carefully.”
On other high profile cases, Kazeem said it was gratifying to report that the cases were progressing in court, saying the Synagogue Church of All Nations case for instance on the collapsed building, which killed people, was progressing well, adding that a no case submission filed by the accused persons instead of defending the case was recently dismissed by the Court, while the General Overseer of the Christian Praying Assembly, Rev. Chukwuemeka Ezeugo, aka Reverend King, who is presently on death row imposed by the court, would have his fate determined in due course.