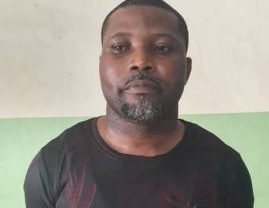 Operatives of the Quick Intervention Team (QIT) of the Imo State police command have arrested one Eze Obinna, 35, an escapee prison inmate, over his alleged involvement in series of kidnap incidents.

The team had stormed Obinze, Owerri West Local Government Area of Imo State, and arrested Obinna who had since his escape from the prison formed another deadly kidnap gang and had been terrorising Owerri and its environs.

Sometime in December 2020, the suspect was arrested by the operatives of the Anti-Kidnapping Unit for kidnapping a victim, where he personally transferred the sum of N5 million from the victim’s bank account to his own account, and later collected the sum of N4 million cash as ransom from the same victim.

The victim’s Toyota Venza car is yet to be recovered. Three AK-47 rifles with large number of ammunition were also recovered from his gang then.

They were charged to court and remanded in prison custody. However, they were set free during the attack on the prison facility on April 5, 2021.

The Commissioner of Police, Abutu Yaro, has ordered the arrest of all his gang members, as well as the mopping up of their operational arms.

The command’s spokesman, SP Ikeokwu Godson Orlando, said in a statement that investigation into the case is ongoing.